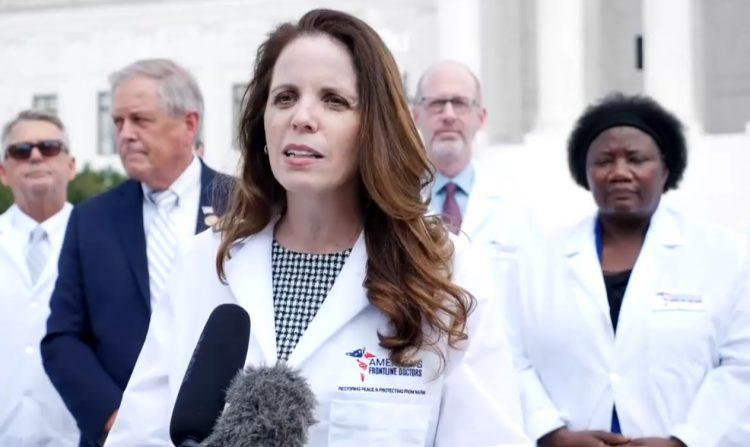 On Monday, July 27, 2020, a group of doctors gathered in Washington, DC, to dispel fears surrounding the coronavirus and COVID-19.  Regarded as the “White Coat Summit”, several doctors gave their frontline accounts about the virus.  Dr. Dan Erickson, owner of Accelerated Urgent Care, stated that “99.8% of people get through this with little to no progressive or significant disease.”

Watch the video to listen to his statements.  Take heed to his words.

Erickson addressed the dominant narrative of rising cases of the virus within the U.S. and pointed out that it is causing undue fear.

“A case is a person, healthy, that tested positive. The vast majority. But the public hears cases and thinks, ‘Oh my goodness. These are sick people!’ No the vast majority — 99.8 percent of people get through this with little to no progressive or significant disease,” Erickson said.

The focus should not center on cases, he continued. Rather, the narrative should focus on hospitalizations and deaths that “are appropriately coded on a death certificate,” he said, stressing “appropriately coded.”

“This is the first time I’ve seen quarantining healthy,” he continued. “I don’t know if you guys think that’s normal. I find that very strange.”

While he said it was good that the U.S. prepared for the worse, Erickson said we must be “realistic with the response.”

“Who showed up? Most of the patients that were showing up for me were very mild illness,” he said, adding that he wanted to come out and “give reality to the situation on the ground and sort of help dispel some fear that people have had.”

Watch the second video to hear his take on the “successfulness” of the lockdowns.

Was the lockdown successful? I say yes very successful. Successful in things like this. Anxiety hotline calls up 1000 percent. Child abuse both sexual and non up. Financially, emotional distress, Suicide. Alcohol. 150,000 Americans a month not receiving cancer screening. It’s been effective alright, in all the wrong metrics — in all the areas we didn’t want it to be effective. Delay in medical care. We talked about that. Orthopedics, nonessential. Suicide calls up 600 percent. Suicide calls. We heard other doctors mention this. So was the lockdown effective? If that’s the effect you were going for, then yes but it was trying to flatten the curve but it had these secondary consequences that I think are devastating. People staying indoors. No exercising as you mentioned. No Vitamin D.

Dr. Erickson even mentioned the number of people driving alone in cars wearing masks stating, “There’s no sense to it.  It’s fear.”

Dr. Simone Gold, an emergency room physician, joined her colleagues at the “White Coat Summit” to address the massive disinformation campaign surrounding coronavirus/COVID-19, reminding the general public that health care systems are not being overwhelmed.

Watch the video and pay attention.  She addresses the negative effects of mass lockdowns while addressing critics.

Breitbart News has the summation.

“We have to remember that the whole purpose of locking down was not to overwhelm our health care system,” Gold said. “Ok, we cannot forget that.”

“We cannot just keep changing the definition and keep moving the goalpost,” she continued, adding that “we are not overwhelming the health care system.”

Gold said she experienced “many months” of a decreased workflow during the nationwide lockdowns, explaining that she would see “not even half the number of patients I normally did” — a rarity for an ER doctor.

“American College of Cardiology, they put out a paper that about 40 percent of strokes and heart attack-like or chest pain situations were just absent. The same thing for strokes,” she said.

Gold citied one of her colleagues who saw “less than half the numbers of people he would otherwise help,” suffering aneurysms in their brain “that would cause bleeding and cause a stroke.”

“And he was seeing less than half. Where are all those patients? Are they labeled COVID deaths? Those are casualties of COVID, but they’re not the virus,” she said. “They’re not the virus. So the death effects of the lockdown are extreme.”

Gold added that she wrote a letter to President Trump “several months ago,” calling the lockdown — not the virus itself — a “mass casualty incident.”

She emphasized that “more people were being harmed by the lockdown and dying from the lockdown than the virus.”

“And until people listen to us, the frontline doctors, they thought that was crazy talk. It’s not even close to crazy,” she explained, citing the rise in suicide calls and reports of increased child abuse.

“In all ways, the lockdown is a problem. Strokes that went missing — anyway the list is endless,” she added.

If this isn’t enough, Dr. Stella Immanuel spoke about her experience treating coronavirus patients with hydroxychloroquine, zinc, and Zithromycin, aka Zithromaz or Z-pack.  In fact, you can see Dr. Simone Gold standing behind Dr. Immanuel.  According to Dr. Immanuel, she has treated over 350 patients with COVID-19, including those with underlying health problems such as diabetes, high blood pressure, asthma etc., with a combination of hydroxychloroquine, zinc, and Zithromax with 100% success rate – no deaths.  She stated she had patients ages 87 and 92 that were treated successfully.  In another stunning revelation, Dr. Immanuel stated that she and other physicians began taking hydroxychloroquine as a measure to deter the coronavirus – again, with complete success as not one individual using the drug as a prophylactic became sick.

Dr. Immanuel cited her uses of hydroxychloroquine was based on a study in 2005, published on the NIH website, claiming the drug worked against coronavirus infections.

According to the study:

Results: We report, however, that chloroquine has strong antiviral effects on SARS-CoV infection of primate cells. These inhibitory effects are observed when the cells are treated with the drug either before or after exposure to the virus, suggesting both prophylactic and therapeutic advantage. In addition to the well-known functions of chloroquine such as elevations of endosomal pH, the drug appears to interfere with terminal glycosylation of the cellular receptor, angiotensin-converting enzyme 2. This may negatively influence the virus-receptor binding and abrogate the infection, with further ramifications by the elevation of vesicular pH, resulting in the inhibition of infection and spread of SARS CoV at clinically admissible concentrations.

Conclusion: Chloroquine is effective in preventing the spread of SARS CoV in cell culture. Favorable inhibition of virus spread was observed when the cells were either treated with chloroquine prior to or after SARS CoV infection. In addition, the indirect immunofluorescence assay described herein represents a simple and rapid method for screening SARS-CoV antiviral compounds.

A screenshot was taken of the NIH library website where this study appears since a previous study cited in another article was abruptly withdrawn within hours of it appearing on Sons of Liberty Media.  Why was that taken down?  Only Fauci’s NIH can answer that, but a good guess is several individuals found it and were bringing it to the public’s attention, proving their statements as lies.

So, again, why is the American population not being given this information by the Trump administration and the medical quacks Trump appointed as the “experts”?  Because there is an agenda at play.  No need to rehash what that agenda is since it has been covered ad nauseum in order to wake up the sheeple.