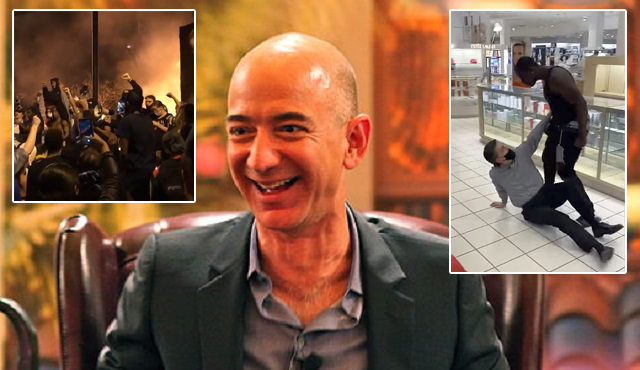 Amazon CEO Jeff Bezos, the world’s richest man, said during testimony before congress on Wednesday that the US is in the middle of a “much-needed race reckoning” and portrayed himself as the son of an “immigrant” and “refugee” because his adoptive father is Cuban.

“Of course, this great nation of ours is far from perfect,” Bezos said during his opening statement. “Even as we remember Congressman John Lewis and honor his legacy, we’re in the middle of a much-needed race reckoning.”

Amazon’s own drivers are being attacked in the streets but I guess that’s a small price to pay considering their brick-and-mortar competition is being destroyed!

Amazon Issues Statement Backing Protests As Their Drivers Are Being Attacked In The Streets https://t.co/XoeNm9SSuJ

Bezos’ testimony revolved around him trying to portray himself as an underprivileged minority and taking part in what Steve Sailer dubbed the “Flight from White” — the process whereby white people are electing to identify as anything but white to avoid accusations of “white privilege” and being viewed as a member of the “despised majority.”

Of course, this great nation of ours is far from perfect. Even as we remember Congressman John Lewis and honor his legacy, we’re in the middle of a much-needed race reckoning. We also face the challenges of climate change and income inequality, and we’re stumbling through the crisis of a global pandemic. […] Immigrants like my dad see what a treasure this country is–they have perspective and can often see it even more clearly than those of us who were lucky enough to be born here.

Bezos isn’t “stumbling” through anything.

He’s richer than ever even with his wife divorcing him and taking 25 percent of his Amazon stake.

Earlier this month, he made $13 billion in one day.

(Incidentally, his ex-wife announced Tuesday she has donated $1.7 billion of her divorce money to a variety of leftist groups, including to a Black Lives Matter group that wants to abolish police and prisons.)

My mom, Jackie, had me when she was a 17-year-old high school student in Albuquerque, New Mexico. Being pregnant in high school was not popular in Albuquerque in 1964. It was difficult for her. When they tried to kick her out of school, my grandfather went to bat for her. After some negotiation, the principal said, “OK, she can stay and finish high school, but she can’t do any extracurricular activities, and she can’t have a locker.” My grandfather took the deal, and my mother finished high school, though she wasn’t allowed to walk across the stage with her classmates to get her diploma. Determined to keep up with her education, she enrolled in night school, picking classes led by professors who would let her bring an infant to class. She would show up with two duffel bags–one full of textbooks, and one packed with diapers, bottles, and anything that would keep me interested and quiet for a few minutes.

My dad’s name is Miguel. He adopted me when I was four years old. [Bezos’ biological father is Ted Jorgensen, who is Scandinavian.] He was 16 when he came to the United States from Cuba as part of Operation Pedro Pan, shortly after Castro took over. My dad arrived in America alone. His parents felt he’d be safer here. His mom imagined America would be cold, so she made him a jacket sewn entirely out of cleaning cloths, the only material they had on hand. We still have that jacket; it hangs in my parents’ dining room. My dad spent two weeks at Camp Matecumbe, a refugee center in Florida, before being moved to a Catholic mission in Wilmington, Delaware. He was lucky to get to the mission, but even so, he didn’t speak English and didn’t have an easy path. What he did have was a lot of grit and determination. He received a scholarship to college in Albuquerque, which is where he met my mom. You get different gifts in life, and one of my great gifts is my mom and dad. They have been incredible role models for me and my siblings our entire lives.

Bezos’ adoptive Cuban dad looks whiter than he is:

I don’t fault him or Jeff Bezos for his “whiteness” but it’s hilarious considering Bezos has been pushing Robin DeAngelo’s “White Fragility” on the front page of Amazon.com and has a partnership with the Southern Poverty Law Center.

.@RepMattGaetz challenges Jeff Bezos for using the Souther Poverty Law Center to dictate who can receive donations on Amazon Smile:

"Why you would place your confidence in a group that is so out of step and seems to take mainstream Christian doctrine and label it as hate?" pic.twitter.com/FedLAuHO4s

This whole race war is likely being drummed up in large part to distract from the massive consolidation of power and wealth in the hands of Big Tech since the start of the corona-shutdown.

They’re dividing and conquering the masses to keep them from uniting against the $6 trillion bailout and they’re shutting down all dissenters in the name of fighting “hate” and “misinformation” all while shielding themselves from any criticism by acting as oppressed minorities held down by the “racists” in Middle America.

Bezos to racist customer: 'You're the kind of customer I'm happy to lose' https://t.co/OFipsONsnp

The situation is almost beyond parody!