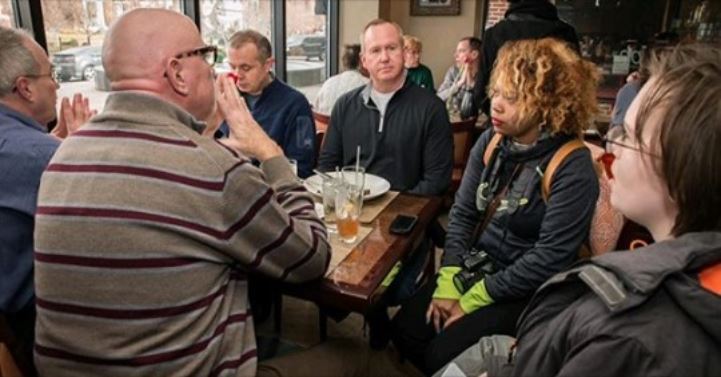 *While this happened quite a while back it is as mind boggling today as it was when it occurred. The BLM movement sure has morphed into quite a different organization thanks in part to the massive amounts of money being invested from radical far left groups…

Ah the genius tactics of the angry ‘Black Lives Matter’ and their #BlackBrunch movement have reached a new level.

Now, in addition to storming into restaurants where white people are trying to eat breakfast or lunch and complaining about the injustices they face as African Americans here in America they now have decided to pull up a chair at your table and stare at you.

Yes these people will actually come stare at you while you eat! This is just so ridiculous I have to laugh. And I have to wonder how they have the time to go and harass people while they eat-don’t they need to be at work and making a living to support their families?

I admit, this is better than going and killing all Whites.

But still, this is totally unacceptable in my opinion but I will confess to being White- well, I am Italian and German but was born in the U.S.A. and have blond hair and blue eyes. Is that a crime nowadays? Am I ‘privileged’ – NO!

I have worked my ass off since I was 13 and my parents were from the ‘Depression’ era which means you ate everything off your plate (there are starving people in Africa they used to say) and I wore hand-me-downs until they were unwearable and all that sort of thing but I don’t complain!

I was raised to respect people and taught morals, values, love for Country and love for God.

What these people expect from bothering people while eating I can’t really tell you but I do know that it is nothing less than rude and actually it is illegal. If you get bothered by these people I would call the police to have them removed.