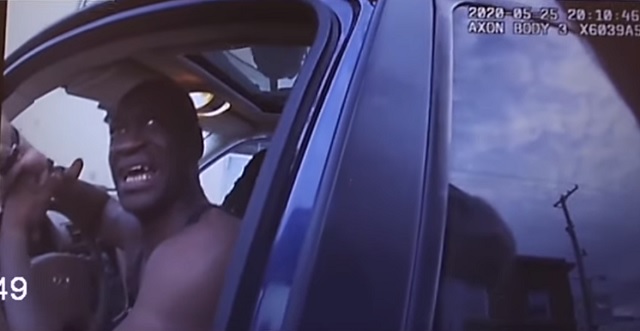 Bodycam footage of George Floyd’s arrest by Minneapolis police — which has been hidden from the public by Minneapolis Attorney General Keith Ellison for over 2 months — was just leaked to the Daily Mail and it shows Floyd resisted arrest for over 8 minutes and 22 seconds, asked to be put on the ground and lied to police about not being high on drugs.

Floyd, who was placed under arrest for using a counterfeit bill to defraud a local small business, is seen sitting comfortably in the driver’s seat of his Mercedes SUV and immediately after police knock on his window is heard protesting, “I didn’t do nothing!”

Floyd refused to show both hands to arresting officer Thomas Lane and begged him not to shoot him after he raised a gun at him. Officer Lane is heard saying he’s not going to shoot him while ordering him repeatedly to show his hands.

The video shows Floyd, 46, started crying almost immediately (before police laid a hand on him) and fought with nearly every one of the police’s orders.

Floyd is seen falsely claiming he wasn’t on any drugs despite the official autopsy report showing he had enough fentanyl in his system to kill a person (as well as a host of heart conditions, including “severe” and multifocal arteriosclerotic heart disease, hypertensive heart disease, an enlarged heart and clinical history of hypertension) and also had methamphetamine in his system, THC from marijuana in addition to cotinine from cigarettes and caffeine. Floyd is seen relentlessly refusing to comply with police’s orders to enter the back of their SUV patrol vehicle by claiming he’s “claustrophobic” — even though he was seen sitting comfortably in his own SUV just minutes earlier.

Floyd also told police his mom just died even though she had been dead for two years.

The video also confirms Floyd claimed he couldn’t breathe before being placed into the police’s patrol vehicle while he was standing and asked police to be put on the ground.

No wonder Keith Ellison has been refusing to release this video to the public! UPDATE: I captured a screenshot of the comments (almost all of which are calling out what a scam this whole case was) in case they delete them.