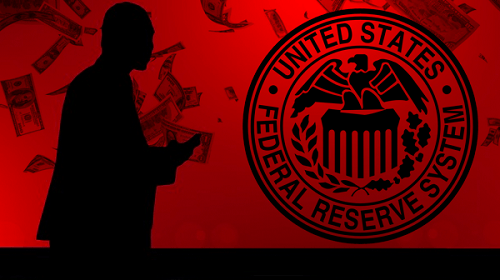 The Federal Reserve, with the help of their puppets in the government, is trying to kill what’s left of the middle class.  This should be obvious by now, and yet people are still walking around more afraid of a virus than opening their eyes to what’s happening.

Who would have thought a face mask over the mouth and nose would cause such epic blindness. Greg Mannarino has been pointing out the goals of the Federal Reserve for years now.  It’s all coming to fruition, and in order to own the world, they must eliminate the middle class.

They are going for small businesses and have 50% of those gone already. “Maybe they’re going for, I don’t know, 75, 100%, while corporate American, right now is stronger than it’s ever been!” Wake up, people.  This is all by design. It’s a century-old plan to own and rule the entire world.

It’s in our face and it’s no shock, adds Mannarino of the corporations and government merging together via the Federal Reserve. They are no longer hiding the agenda. There will be no middle class in the New World Order. They need poverty-stricken slaves only, while they sit at the top and rule to the world.  It’s pretty sad that most people still haven’t figured it out yet and will go cast a ballot in November thinking the Federal Reserve hasn’t already selected the puppet they will use for the next four years.

The only reason there are two political parties is to give people the illusion of choice. This should go without saying, but so many are still stuck in a paradigm that will wholly enslave and impoverish them unless they wake up to it, and soon! It’s “critical” to use Mannarino’s word.

Basically, we don’t control the outcome of elections. The central banks do. If for one second, the Federal Reserve sees Biden as being more “on board” with their epic distribution of debt and credit, he WILL be the next president.  Trump could still  be reelected because he’s been incredibly effective at helping the central bank take over the planet. –SHTFPlan

Trump Is A Pied Piper For The New World Order Agenda

Pay attention to what’s happening. It’s all in front of our faces now.

This process of controlled demolition needs a considerable distraction so that the central banks and the globalists ultimately avoid blame for the painful consequences of the event. Enter Donald Trump and the false Trump vs. Globalist paradigm. As I mentioned last week, the Fed is only one side of the equation for the crash; Trump is the other side.

After two years of witnessing Trump in action, it is clear to me that he is an active participant in the new world order agenda, and not just an unwitting patsy for the economic crisis.-Brandon Smith

However this plays out, it was all set up this way. The set up has begun for a contested election and overwhelming societal dysfunction regardless of which puppet the Federal Reserveselects for the illusionary throne. Take off the left vs. right paradigm glasses that are being used to divide and distract and look around clearly while applying critical thinking.

MSM Frenzy: Trump Floats The Idea Of Delaying The Election

The election in November could be the start of massive uprisings, no matter which puppet the Federal Reserve has selected, and it’s set up that way already. The puppets are already beginning their dog and pony show and dancing for the public on command.

If you feel the desire to protect your wealth, you still can’t beat gold and silver. Other than that, have a lot of a third metal, lead, on hand.