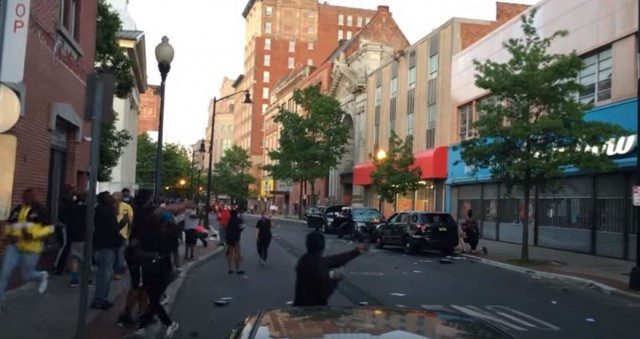 According to documents filed in this case and statements made in court:

On May 31, 2020, large-scale protests were held throughout the United States, including in Trenton, in response to the death of George Floyd, who died on May 25, 2020, while in the custody of the Minneapolis Police Department. Although the protest in Trenton was peaceful earlier in the day, violence erupted later. A group of individuals proceeded down East State Street and began to smash store fronts, loot stores, and attack multiple marked Trenton Police Department vehicles.

A street camera and other video footage taken by an individual present recorded Dockery light an explosive device and throw it through the open front driver’s side window of a Trenton Police Department vehicle. Dockery then removed his shirt and handed it to Melecio, who attempted to stuff the shirt in the gas tank of the police vehicle and ignite it. Melecio was assisted by Justin D. Spry, who was charged in a criminal complaint on June 2, 2020, for his role in the riot. Law enforcement officers on scene observed Spry as he attempted to ignite the vehicle. Melecio fled, and Spry attempted to flee, but was arrested. During the course of Spry’s arrest, Dockery lit another explosive device and threw it over the Trenton Police vehicle at the arresting officers, where it exploded at their feet. Law enforcement identified Melecio and Dockery through their distinctive tattoos seen on the video footage.

The charges and allegations contained in the complaint are merely accusations and the defendants are presumed innocent unless and until proven guilty.