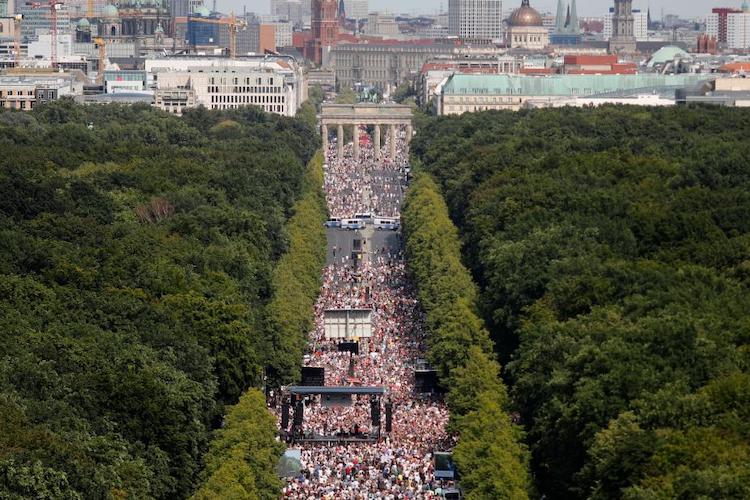 We’re at a crossroads at the moment, and most people are choosing to obedience to the emerging new order. Here in the U.S., the hysteria and fear is thick, palpable and ugly. Just as Stanley Milgram demonstrated in his now famous social experiment, most people are turning against their fellow neighbors and countrymen and willfully posing as enforcers of the new normal.

The media in this nation is a cancer, eating away at the social fabric of our society, demanding that we find differences between ourselves and everyone else, and demanding that we lose ourselves in the collective madness. The American spirit of individualism and personal liberty is being stamped out by peer pressure to conform and obey. This isn’t how it’s supposed to be, though.

As a people, Americans have long been admired the world over for our supposed courage in defending liberty, but today we’re so fractured and confused that we can’t seem to come together in any meaningful numbers. The police state that has emerged around us has been so discouraging to real protest movements that we’ve even given up protesting against the never-ending wars. We’ve become docile, domesticated, distracted, divided, dysfunctional and delusional. We no longer oppose tyranny.

Time for someone else to carry the torch.

Last week in Germany, a massive crowd of people hit the streets to protest the lockdowns which are killing businesses, destroying families, and causing untold stress, loneliness and depression, all in the name of preventing the spread of a virus. ‘Masks Make Us Slaves,’ read one banner.

Protesters who came from across the country held up homemade signs with slogans like “Corona, false alarm,” “We are being forced to wear a muzzle,” “Natural defense instead of vaccination” and “We are the second wave.” [Source]

Mainstream media coverage of the event downplayed the size of the crowd. The Guardian reported, “Up to 20,000 demonstrated against restrictions, raising fears of a rise in infections,” diminishing the crowd while also framing the demonstration as a threat to the fear-addled rule-followers.

ABC News reported, “Thousands protest in Berlin against coronavirus restrictions,” then added, “Protests against anti-virus restrictions in Germany have drawn a variety of attendees, including conspiracy theorists and right-wing populists.” This, of course, is an attempt to demonize the event and give the false impression that those who are concerned for their rights are subhuman.

The New York Times wants you to believe that all of these people are a danger to those who follow orders and go along to get along. They said that 17,000 people marched, and insinuated that they are all somehow allied with Ne0Nazis. Bollocks.

This was the scene in Berlin, where an estimated 17,000 people defied social-distancing and mask requirements to join a protest supported by neo-Nazi groups, conspiracy theorists and others who said they were fed up with the restrictions.

CNN took a jab as well in their article, “Thousands gather in Berlin to protest against Covid-19 restrictions.” Their spin is that all of the people involved are from the far-right. Say what?!?

“A large crowd of far-right groups gathered for a “sit-in” at Berlin’s iconic Brandenburg Gate on Saturday to protest against the German government’s coronavirus restrictions.

A march earlier Saturday that was criticized by police for not adhering to rules on social distancing and face masks was halted by organizers.” [Source]

Can you read between the lines, people? The media is goading you to live in fear not only of a contentious virus, but of your fellow man. The threat is being expanded to include not only the disease, but anyone who questions the official narrative about the disease.

According to RT, “500,000 Germans apply to take part in Stuttgart lockdown protest, but police RESTRICT rally to 5,000 due to ‘social distancing,” which is a heck of a lot more people than what other news outlets reported.

The real story is that there were a lot more people at this demonstration than the MSM wants you to believe, and that the crowd was made up of people of all walks of life, not just racist Nazis who deserve to be treated as less-than-human. Some estimates say that up to 1.3 million people were involved, with people arriving from all over Germany to participate.

“Now, most media doesn’t want to talk about this story at all, and if they do, they’re only referring to these massive numbers of people as conspiracy theorists.” -Ben Swann

Ben Swann destroys the mainstream narrative on this in the following video, diving into who these people were, and why they opposed the lockdown.

Ralph Smart also chimes in, reminding us that millions of people are waking up, and that the mass awakening is the one thing the powers-that-be fear most.

I hope you’re paying attention people. There is an awakening happening, and you are not alone. This is the global awakening, and it will be impossible to keep the lid on this for much longer.

Dylan Charles is the editor of Waking Times and host of Battered Souls: A Podcast About Transformation, both dedicated to ideas of personal transformation, societal awakening, and planetary renewal. His personal journey is deeply inspired by shamanic plant medicines and the arts of Kung Fu, Qi Gong and Yoga. After seven years of living in Costa Rica, he now lives in the Blue Ridge Mountains, where he practices Brazilian Jiu Jitsu and enjoys spending time with family. He has written hundreds of articles, reaching and inspiring millions of people around the world.

Dylan is available for interviews and podcasts, and offers his services as a professional life coach to people looking to break free from the patterns and programming that hold them back in life. Contact Dylan at [email protected].

This article (Covering Up the Awakening – Massive Lockdown Protest in Berlin Downplayed and Demonized by MSM) was originally created and published by Waking Times and is published here under a Creative Commons license with attribution to Dylan Charles and WakingTimes.com. It may be re-posted freely with proper attribution, author bio, and this copyright statement.