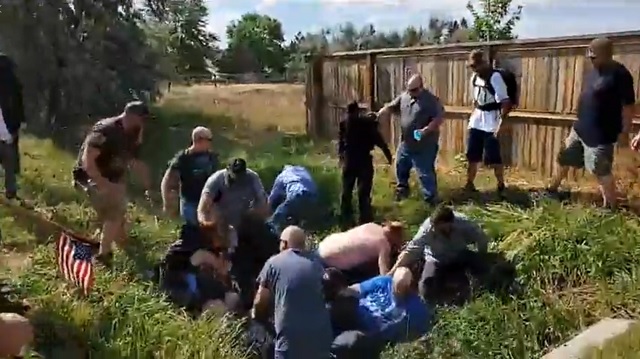 Antifa were filmed getting pummeled and thrown into a ditch on Saturday after a fight broke out at a pro-police rally in a residential neighborhood in Fort Collins, Colorado.

Antifa terrorists last month showed up to another pro-police rally and attacked Michelle Malkin and other patriots without provocation while police were ordered by their commander to “retreat.”

There was fears antifa would try the same stunt at this rally over the weekend but instead they ended up in a ditch and several leftists were reportedly arrested.

The footage was captured by the on-the-ground activists at Major League Liberty, several clips of which were shared below:

“Antifa commie scum” get their asses handed to them in Colorado by local residents. pic.twitter.com/CQzxlnlxbB

Antifa assaulted someone in a wheelchair. That’s what set off the beat down from residents. Police were on the scene to arrest the commies. pic.twitter.com/LhqHFztjV2 From The Daily Wire, “Antifa Beaten After They Allegedly Went After Man In Wheelchair: ‘You Guys Came To The Wrong City'”:

Several people among the pro-police protesters stated repeatedly throughout the video that there was a kid’s birthday party in the area and suggested that the far-left activists had disturbed the event. […]

A spokesperson for Fort Collins Police Services said that numerous people had been arrested over “physical disturbances” that occurred.

“We respect everyone’s right to peacefully assemble to voice their concerns,” the spokesperson said. “For the safety of our community, acts of violence, destruction of property, and other unlawful behavior will not be tolerated.”

Malkin and others were attacked by antifa terrorists last month during a “Back The Blue” rally in Colorado:

Outrageous violence. These tyrannical, left-wing anarchists hate free speech. If you do not agree with them, they believe you must be beaten down – literally. @michellemalkin https://t.co/aiyJqQTtxm

Nick Rogers, the head of Denver’s police union, said police were given a “retreat order” and The Gateway Pundit speculated Denver police chief Paul Pazen — who marched with BLM thugs in June — may have been involved.

I guess it didn’t work out this time the way antifa had planned!