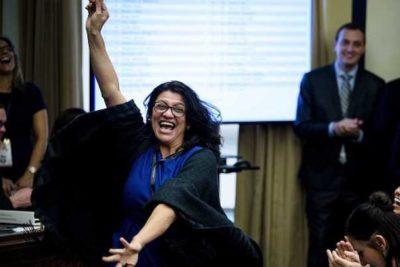 The Democrat party cares not. They revel in perfidy. Tlaib, her jihad sister Ilhan Omar and the rest of the criminal corp are placed above the law.

Minnesota Rep. Rashida Tlaib, a member of the much ballyhooed “Squad” led by Rep. Alexandria Ocasio-Cortez, has been found guilty of misusing campaign funds.

But the committee did not admonish the first term lawmaker and ‘squad’ member, noting that it is within existing rules for a candidate to draw a salary from their campaign under certain conditions.

It found a ‘portion’ of the salary she took after her 2018 election win were ‘inconsistent’ with the requirements of federal elections law. But it said her errors were of ‘bad timing and not ill intent,’ and that she had made ‘good faith’ efforts to comply with the law’s requirements.

An appendix included with the finding shows Tlaib’s correspondence with her staff as well as a lawyer to determine the propriety of taking a salary, amid apparently urgent needs after she left her job with a public interest law firm to campaign full-time.

“While the Committee recognizes that the campaign environment can at times lend itself to hurried decision-making, as a Member-Elect of Congress, Representative Tlaib had a greater duty to ensure that any funding she received from her Campaign after her general election was fully compliant with statutory requirements and fully transparent with the public,” the Committee said in its report.

“Based on its review, the Committee determined that Representative Tlaib did not comply with the letter of the relevant laws and regulations governing her receipt of salary payments from her Campaign,” it said.

“The Committee did not find evidence, however, that Representative Tlaib intended to unjustly enrich herself, and recognizes that she made efforts to ensure her compliance with the applicable requirements,” the report said.

Completing this poll entitles you to our news updates free of charge. You may opt out at anytime. You also agree to our Privacy Policy and Terms of Use.

“In light of this, the Committee determined that no sanction was merited, provided Representative Tlaib returns the funds that she improperly received to her Campaign in full within a year of the date of this Report, with the understanding that she can make smaller payments over the course of the year,” it said.

The committee said that it “unanimously voted to adopt this Report and take no further action,” against her.

And after Tlaib’s “satisfactory completion of the above steps, the Committee will consider this matter closed.”

One of the steps that she has to complete is to repay the $10,800 that she is accused of misusing for her personal needs.

The Minnesota representative was having a good week prior to this ruling after she handily defeated her primary challenger Detroit City Council President Brenda Jones.

Her spokesman, Denzel McCampbell, said that the issue has been resolved and that Rep. Tlaib had “made a good faith effort to comply with a complex regulation and no sanction or penalty is merited.”

“Rep. Tlaib hopes the Federal Election Commission will issue updated guidance and clarify a well-intended rule that gives candidates like (her) the opportunity to seek federal office,” the spokesman said.