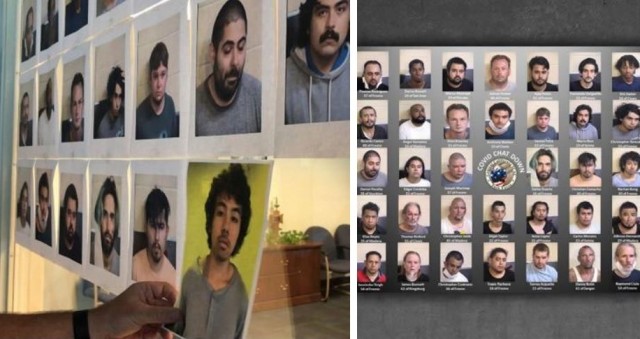 FRESNO, Calif, – Operation Covid Chatdown resulted in 34 men being arrested in Fresno, California for soliciting sexual acts from individuals they believed were 12- or 13-year-old children but were actually undercover law enforcement operatives.

Operation Covid Chatdown is a startling look at how many individuals in just the Fresno region alone are actively grooming children online to meet for sexual encounters. During the undercover operation from July 20 to Aug. 2, 2020, more than 190 online contacts continued to chat even after they knew they were talking to whom they believed was a minor. There were a significant number of instances in which perpetrators also sent sexually explicit images. When the subjects asked the undercover operatives to engage in sexual acts, they were provided an address in Fresno, where they traveled and were subsequently arrested. No real minors were involved in the operation.

These 34 men traveled by foot, skateboard, bike, or vehicle to meet 12- and 13-year-old boys and girls, who turned out to be law enforcement operatives with badges, guns and handcuffs. However, a number of the arrested individuals admitted to victimizing real children during previous attempts. One man admitted he was HIV positive and that he planned to have sex with a 13-year-old child. The suspects face a range of criminal charges including state charges for sending harmful material to seduce a minor, arranging meeting with a minor for lewd purpose, and possession, transmission and transportation of child pornography.

Operation COVID Chatdown was conducted by the Central California Internet Crimes Against Children (ICAC) Task Force. The Central California ICAC Task Force, formed in 2007, is comprised of 64 federal, state and local law enforcement agencies spread throughout nine counties in the Central Valley. It is dedicated to protecting children online and investigating crimes committed against children, which are facilitated by the Internet and computer usage.

Online Safety
Parents and caregivers should be fully aware of their children’s online activities at all times and frequently talk to their children about online safety. Some of the men arrested during Operation COVID Chatdown lied and said they were teenagers. All of them showed up fully expecting to engage in sex acts with children.

Victims
“Victims are not just statistics, they’re real people from families in our neighborhoods,” said King.

Homeland Security Investigations
In 2019, HSI made nearly 4,000 child exploitation arrests nationally, resulting in more than 1,750 convictions. HSI Fresno has led, or assisted in, the investigation and prosecution of crimes involving the sexual exploitation of children which has resulted in 60 arrests, 13 indictments, 12 criminal convictions and the rescue of 2 victims since October 1, 2019. HSI Fresno works hand-in-hand with the Central Valley ICAC Task Force and is the ICAC’s primary federal partner in combatting crimes against children.

HSI brings significant digital forensics expertise, broad legal authorities, and a worldwide network of investigators and professional staff to bear in combatting the global production and distribution of child pornography, child sex tourism, and the trafficking of minors.

HSI encourages the public to report suspected child predators and any suspicious activity through its toll-free Tip Line at 1-866-DHS-2-ICE or by completing its online tip form. Both are staffed around the clock. From outside the U.S. and Canada, callers should dial 802-872-6199. Hearing impaired users can call TTY 802-872-6196