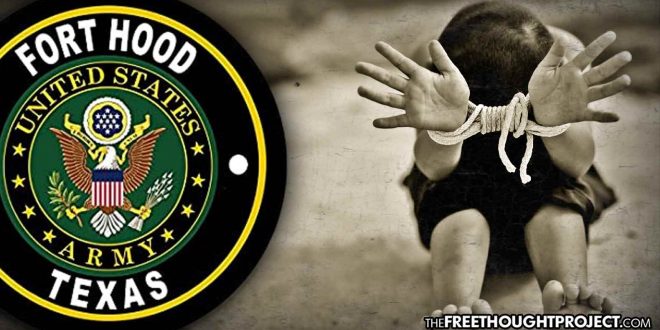 The Fort Hood military base in Texas has come under extreme scrutiny in recent months, as numerous dead soldiers were found on or around the base. This week, the base was in the news again after two Fort Hood soldiers were caught up in a child trafficking bust. The soldiers were among nine Texas residents who were arrested during a two-day child sex trafficking sting in Killeen, the city where the base is located.

“The overall goal of this joint effort was to locate and arrest subjects who were willing to make overt efforts to pay minors to engage in sexual acts,” police spokeswoman Ofelia Miramontez said, according to KWTX.

Miramontez said that social media exchanges between the men running the organization and undercover agents showed that they knowingly traded money, drugs, and alcohol “for sexual acts with girls they believed were 15 or 16 years of age.”

This news comes on the heels of another sex trafficking bust that took place last month in which 6 Fort Hood soldiers were arrested in a sex trafficking sting. It also comes after a string of suspicious and outright violent and gruesome deaths of soldiers.

The first missing soldier to be reported by the national media was found dead near the base on June 21st. The remains were identified as 24-year-old soldier Gregory Morales, who had been missing for months. His death was not even being investigated, as officials with the Army believed that he deserted the base, but now they do suspect that he was murdered.

Then on July 1st, the body of 20-year-old Vanessa Guillen was found near the base. A suspect in that case, Fort Hood soldier Aaron Robinson, shot and killed himself as police moved in to arrest him. Then last month, another missing soldier’s body was found 15 miles outside of the military base, making it the third body found in just the last month. The remains were identified as 26-year-old Mejhor Morta, a soldier from Florida who just joined the army last year as a mechanic.

Countless people have taken to social media after the discovery of Morta’s body and have called for the closing of Fort Hood.

If we go back a few more months, there are even more bodies. Pfc. Brandon Rosecrans, 27, was found dead from a gunshot wound near his burning Jeep on May 18. Spc. Freddy Delacruz Jr., 23, was among three victims found dead of gunshot wounds at an off-base apartment complex on March 14. Spc. Christopher Sawyer, 29, was found unresponsive in his on-post residence on March 9. Spc. Shelby Jones, 20, was shot and killed at a strip club near Fort Hood on March 1.

In addition to the recent string of murders, the base is generally not a safe place for women. According to a 2018 RAND study, Fort Hood had the highest number of reported sexual assaults and rapes of any US military facility worldwide, based on data from 2014.

Fort Hood is one of ten Army bases in the United States that are named after former Confederate generals.

If you or someone you know is a victim of human trafficking. please call the National Human Trafficking Hotline by calling 1 (888) 373-7888, texting HELP or INFO to 233733, or visiting humantraffickinghotline.org.

According to the Texas Attorney General’s Office, there are roughly 79,000 victims of youth and minor sex trafficking in Texas at any given time, along with 234,000 victims of labor trafficking. It’s estimated that 25 million children are enslaved worldwide.