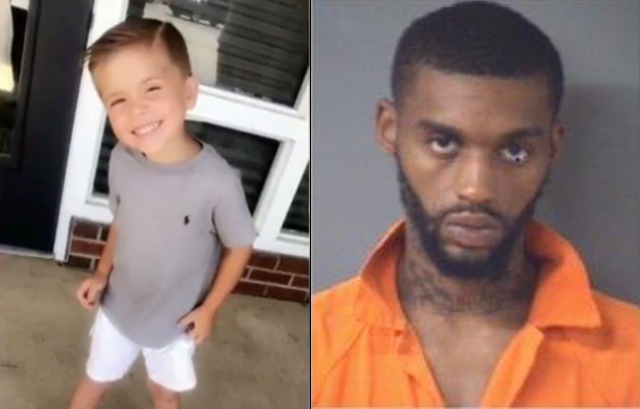 Five-year-old Cannon Hinnant was allegedly executed at point-blank range with a gunshot to the head by 25-year-old felon Darius Nathaniel Sessoms while riding his bike and playing outside his house on Sunday evening in Wilson, North Carolina.

Hinnant’s brutal murder was reportedly witnessed by his two young sisters and a neighbor who couldn’t believe what she saw.

Sessoms, who is the Hinnant’s next-door neighbor, is being charged with first-degree murder. Hinnant’s murder is being ignored by the national media and has only been covered by local news outlets.

Family members said Cannon Hinnant was playing outside his father’s house when he was shot in the head. The boy’s two sisters, ages 8 and 7, saw their brother get shot, according to Cannon’s mother.

Cannon was taken to Wilson Medical Center, where he died.

No details about a possible motive for the shooting have been released, but police said the shooting wasn’t random.

Sessoms lives next door to Cannon’s father, and a neighbor said that the two men had dinner together Saturday night and that Sessoms was at his neighbor’s home earlier Sunday.

Doris Labrant, who witnessed the shooting, said Sessoms ran up to Cannon, put the gun near his head and fired before running back to his own house.

“My first reaction was he’s playing with the kids,” Labrant said. “For a second, I thought, ‘That couldn’t happen.’ People don’t run across the street and kill kids.”

She said she realized the gun was real when she saw Cannon’s father’s reaction to the shooting, and she quickly went inside her home, locked the door and tried to call 911.

“You don’t expect to see somebody shoot someone,” she said.

“Sessoms was convicted of felony larceny of firearms in Wilson County in March 2016, misdemeanor maintaining a place for a controlled substance in Wake County in April 2016 and felony marijuana possession in Nash County in November 2016, according to N.C. Department of Public Safety records,” The Wilson Times reported. “His probation was revoked twice in 2017, resulting in separate three-month stints in prison.”

“Court records show Sessoms has two pending counts of felony maintaining a vehicle, dwelling or place for a controlled substance in Wilson County.”

Cannon’s family and friends are demanding “Justice For Cannon” on social media.

“Cannon’s life mattered!!!” wrote Heather Morgan on Facebook. “My 3 yr old grandson says to me ‘Mimi, I miss Cannon so much. Why did he have to be in that road Mimi? I just want to play with him.'”

“Please join his family and show them they have all the support they could possibly have through this unbearable time,” Morgan said.

A candlelight vigil was organized for Friday night at 8:00 p.m. at the Wilson County Courthouse.

“He was just a loving kid,” Bonny Waddell, Cannon’s mother said through tears on Monday according to The Wilson Times. “He had the biggest heart.”

A GoFundMe was launched by a relative of Cannon’s “to help with funeral expenses and any help along the way for both Cannon’s mother & father with permission.”

The GoFundMe was paused at around $5,000 but the organizer said donations can still be made directly to Shingleton Funeral Home (see her Facebook post for details).

[UPDATE: Another GoFundMe was launched after the prior one was paused.]

The national media will blow up every story of a thug getting shot by police to help trigger rioting and looting across the country but when a criminal thug reportedly shoots a five-year-old white child in the head all we hear is crickets.

If we had an honest media, everyone in the country would know his name.