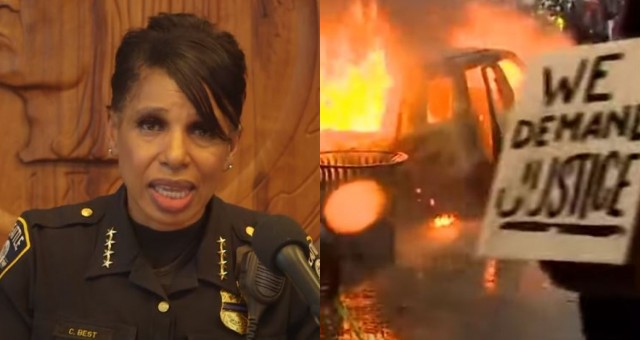 Seattle police chief Carmen Best emailed her resignation notice late Monday, hours after the city council made good on its promise to approve sweeping proposals that would cut about 100 officers and slash the department’s budget, Fox News reports.

Best’s email, which was obtained by Jason Rantz, a local radio host, said that her retirement will be effective Sept. 2.

The Seattle City Council is going to cut 100 cops soon. It will lead to more violence and worse homelessness and they just don't seem to care. Watch my latest appearance on #TuckerCarlsonTonight. pic.twitter.com/CHkx4cRzw8

As Black Lives Matter continues their protests which always turn into looting and riots across our nation the demands to defund Police Departments is somehow working.  While one could argue that the Serve and Protect has been lost in today’s society, the other side of the argument would be, what did people think was going to happen with the amount of tolerance for violence, corrupt legal system and the fall of morals and ethics?

The solution is clearly above my pay grade, I know we suffer that which we tolerate and caving into the demands of the few has become the new “norm” and has lead to witch hunts and the fall of the American values and a clear battle to destroy our nation and our core beliefs.

Fox News went on to say, Best, who served in the department for 28 years, ended her email saying that she looks forward to “seeing how this department moves forward through the process of re-envisioning public safety. I relish the work that will be done by all of you.”

Until “We The People” wake up and lace up to stop the intense fires in our society, we will continue to see our nation burn and our constitutional rights vanish.