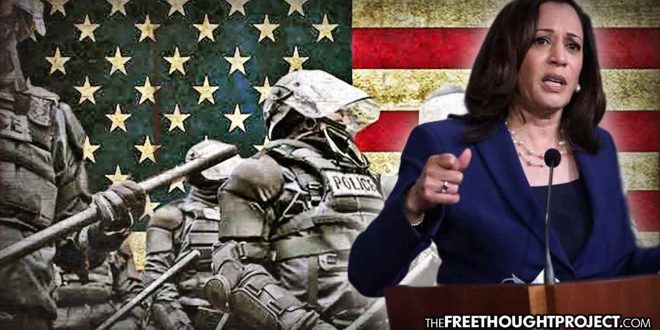 Someone intuitive once said that insanity can be defined by doing the same thing over and over again, and expecting a different result. This pretty much describes the United States political process in 2020 perfectly. Every four years, most Americans rally at the polls, get behind their political football team and claim that if their person wins, all we be good. If their person does not win, it will be four years of hell. In reality, however, no matter who wins, the police state grows, wars continue, and your rights are diminished. Nothing highlights this scenario quite like the Democratic nomination of Kamala Harris — whose made her career cheerleading the police state — in the middle of a police brutality epidemic.

In short, Harris’ entire political career can be summed up in five simple words: Kamala Harris is a cop.

Unless you have been under a rock for the last three months, you have probably noticed the nightly clashes across the country between protesters and police. While there are certainly a handful of violent agitators among the protesters, the majority of them are peaceful. However, the fact that they are peaceful has been no deterrent from more police brutality.

As Americans take to the street to protest police brutality that unfolds across the country on a daily basis, they are being met with even more of it. There is no end in sight and the situation keeps escalating. One would think that the Democratic party would see this and seek to nominate someone who has a track record of fighting for civil rights and not the police state. However, as Harris’ nomination for Vice President illustrates, one would be wrong.

Harris has catapulted herself into political stardom by stepping on the backs of those she locked away, some under false pretense, and countless others for victimless crimes. Though she claims to be against the drug war now, Harris spent over a decade ruining lives by systematically kidnapping and caging nonviolent people for possessing substances deemed illegal by the state.

She not only bragged about it, but she mocked those who sought to reform the system suggesting they are naive sloganeers who do not understand crime prevention.

Harris' beliefs in retributive justice are deeply held. Here's a video of Harris from 2013 at the Chicago Ideas Week mocking criminal justice reformers as unrealistic and ideological. pic.twitter.com/DWk6bliLmw

As attorney general of California, Harris vehemently opposed the legalization of marijuana. She wrongly attributed drug use to an increase in murder rates, only to be proven wrong. But it did not stop her from locking up those pesky pot smokers. In just three years as attorney general, Harris increased convictions of drug dealers from 56 percent to 74 percent.

Harris wasn’t only a staunch advocate of the drug war, but she also took her police state tactics into the homes of innocent families with her anti-truancy initiative. Harris advocated for and followed through with a program that locked parents in cages if their children had too many unexcused absences. To be considered truant, a student needed to only be more than 30 minutes late without an approved excuse on more than two occasions. “Violators” faced anywhere between $150 fine, to weeks in a cage.

This queen of the police state was so proud of her program to arrest parents that she gloated about it. As the Guardian pointed out, in the video below, Harris cheerfully recounts the story of sending an attorney from her office to intimidate a homeless single mother whose children were missing school. She smiles as she recalls how she instructed her subordinates to “look really mean” so that the mother would take the threat of jail seriously.

Kamala Harris at an event hosted by the Commonwealth Club in 2010, explaining her decision as San Francisco DA to get tough on truancy.

One of Harris’ worst acts during her tenure as San Francisco’s District Attorney was committed against Jamal Trulove, who spent years in violent prisons after being wrongly convicted in the murder of his friend, Seu Kuka.

Harris’ role in Trulove’s wrongful conviction came in the form of her office bribing the alleged eyewitness with more than $60,000 in housing and relocation benefits in exchange for her testimony.

Fortunately, Trulove would eventually appeal his case and expose his wrongful conviction and go on to win a $13.1 million payout from San Francisco after he was framed by them.

When Harris announced her bid for president last year, Trulove decided it was time to speak out. In an article in Vice, Trulove said Harris was present at the hearings announcing both the verdict and the sentencing in his case. She even briefly locked eyes with him at one of the proceedings, offering what seemed like a “smirk,” he said.

“She wanted to be present for a celebration of a conviction,” Trulove said. “That’s what it felt like—a celebration.”

Instead of apologizing for her past atrocities, Harris draws on the above police state tactics she facilitated and implemented as “experience.” With her police state experience, it’s a wonder she wasn’t pegged by the Trump administration for Attorney General. Despite her hardcore past being in lockstep with pro-law enforcement Republicans, she will now lead the left into their “progressive” form of tyranny.

To sum it up, not only has the tone deaf Democratic party nominated a cop—an authority figure who likes to use government force to inflict punishment—for VP in the midst of a policing crisis, they have also nominated a ruthless and corrupt career politician who has jettison her political aspirations forward by laying waste to the lives of innocent people. This is 2020 in the land of the free.