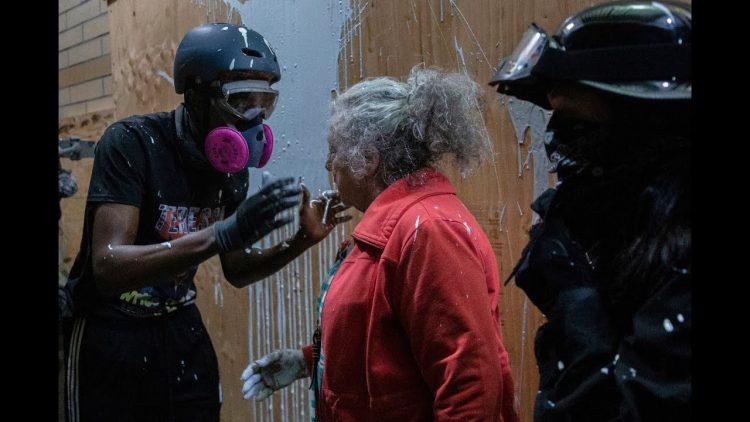 Rioters have again converged on Portland neighborhoods chanting, “Every city, every town. Burn the precincts to the ground.”

This time, on the 70th night of their lawless attacks, a pair of elderly women met these leftists head-on in Portland, Oregon. The target this time was the city’s east precinct.

The station reported that an elderly woman who said she lives in the neighborhood pleaded with the group to stop the vandalism and stood in the way of those who were splashing paint on the plywood outside the building.

So the rioters did what any anarchist would do: they splashed paint on her and wrapped crime scene tape around her head.

As I read an article highlighting the story, the part that got my attention wasn’t the behavior of these humans acting like animals.

No, there was something more to the story that stood out to me. It was the words that this mob yelled at the woman, “This isn’t your world anymore!”

Let that sink in for second…

The reality is, these criminals are right. This old woman’s sense of virtue, honor, respect for law, and plain humanity no longer have a place in the “new world” lawless rioters are creating.

Thankfully at this point and time these grown children are only throwing silly temper tantrums. However, while we focus energy and anger on them, I believe we are being sidetracked from paying attention to the orchestrators of this chaos.

Why are police not encouraged to get this under control?

Why are the governors, mayors, council members, and civil magistrates not cleaning this mess up when it could be done quickly and efficiently?

Why is the President excoriated for offering aid and assistance to citizens in these war zones that he swore an oath to protect?

Make no mistake, the behavior of the mobs in the streets are not only encouraged by their parent figures in office, they have learned this behavior from their parents, the nanny state.

Consider the numerous governors right now, in concert across these United States, that have assumed powers not allowed them by the terms of their office and misuse the police power to enforce their unlawful edicts, mandates and orders that destroy the livelihood, businesses, property of the law-abiding Americans.

Rather than invoking special emergency powers when their cities are on fire, they invoked power where there is no emergency in order to suspend the constitutional rights of law-abiding citizens.

What we are seeing is hateful power structures that are willing to suppress, oppress, and deny the God-given rights of people like our brave elderly woman.

The reality today is the same reality that has always existed in our world: the two greatest threats to liberty are criminals and government.

Thomas Jefferson believed, “In questions of power then, let no more be heard of confidence in man, but bind him down from mischief by the chains of the constitution,” or else the later will become a legalized version of the first.

Don’t lose your fight Americans, our cause is tied in with the Creator…

Sign up for a FREE U.S. Constitution course with Jake MacAulay and the Institute on the Constitution.