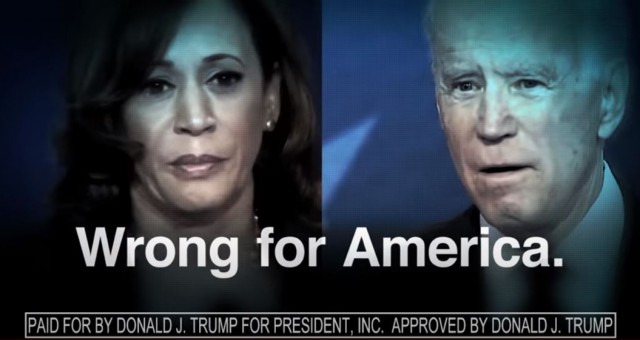 While serving as district attorney in San Francisco and later attorney general of California, vice-presidential pick Sen. Kamala Harris, D-Calif., was once known as a tough on crime prosecutor but later drifted to the left, as she rose through the ranks of the political arena.

Her shift leftward is now front and center as Republicans aim to tag the 2020 Democratic ticket as “radical,” after she was announced as Joe Biden’s running mate on Tuesday, Fox News reports.

Meet Phony Kamala Harris
take our poll - story continues below
Completing this poll grants you access to DC Clothesline updates free of charge. You may opt out at anytime. You also agree to this site's Privacy Policy and Terms of Use.

With Harris as Joe Biden’s ‘political living will,’ he is surrendering control of our nation to the radical mob with promises to raise taxes, cut police funding, kill energy jobs and open our borders. ~ Trump War Room

The clip ended by saying Biden and Harris have “jointly embraced the radical left,” and are “perfect together” but “wrong for America.”

It was no surprise when Biden released who his running mate was, he is the Democratic puppet and doing the bidding of his puppets masters.  The Democrats have put their boot on Biden’s neck as they demanded he pick a black female as his running mate.

“Kamala Harris ran for president by rushing to the radical left, embracing Bernie’s plan for socialized medicine, calling for trillions in new taxes, attacking Joe Biden for racist policies,” the Trump campaign said in a video tweeted by President Trump. “They smartly spotted a phony — but not Joe Biden. He’s not that smart,” the ad continues, before adding Biden “is handing over the reins to Kamala” if the two win in November, Breitbart reports.

It is easy to dismiss Biden and Harris but it would be a grave mistake, the Democrats are still forcing mail in ballots and shutting down our nation.  This would give them the cheaters edge to corrupt the vot already corrupted voting system further in their favor.