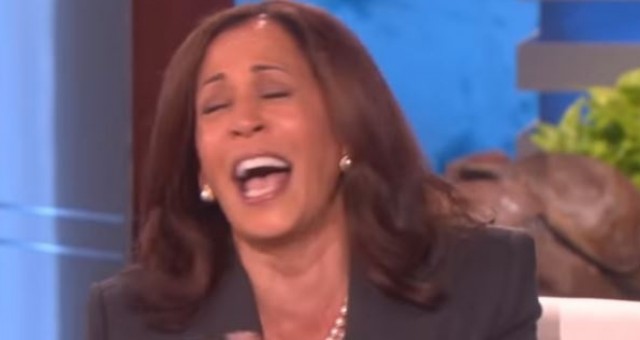 Sen. Kamala Harris (D-CA) once made waves following an appearance on Ellen, where she laughed hysterically after joking about killing President Trump during a rapid-fire question session with host Ellen DeGeneres, Breitbart reports.

At the time of the appearance, April 2018, Harris remained mum on her presidential aspirations but answered a series of amusing questions about her first celebrity crush, nicknames, and the most “rebellious” thing she did as a teen. Then DeGeneres asked, “If you had to be stuck in an elevator with either President Trump, Mike Pence, or Jeff Sessions, who would it be?”

“Does one of us have to come out alive?” Harris at that point the crowd busted out into laughter and Harris herself was laughing and had to take a moment to gain composure.

@KamalaHarris @SenKamalaHarris was on @TheEllenShow and cracked what was clearly a very funny joke to her and the host. Can you imagine an R senator having said something similar about then Pres @BarackObama ? https://t.co/uT3qRyzY1E

Ellen DeGeneres put down her questions to clap her hands and praised Harris for her “wit”.

It is easy to dismiss Biden and Harris but it would be a grave mistake, the Democrats are still forcing mail in ballots and shutting down our nation.  This would give them the cheaters edge to corrupt the votes which are already in a corrupted voting system.

The Democrats will not stop until they have torn down every American Value that we hold so dear to us.