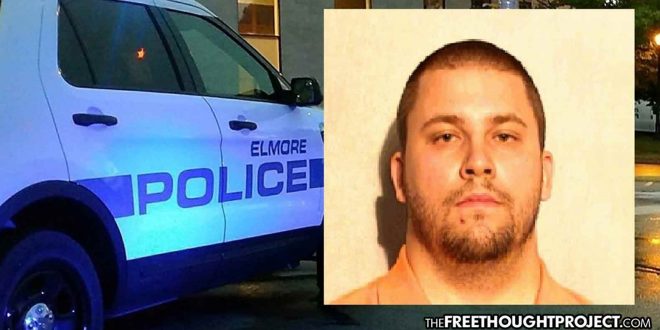 Elmore, OH — Residents of Elmore, Ohio likely felt secure when they saw the police vehicle belonging to Elmore police officer Samuel Kurp drive through their neighborhoods. They likely felt “protected” and “safe” as Kurp crept down their streets. However, they won’t feel so protected and safe anymore now that this alleged pedophile cop was arrested for distributing child pornography whilst on the job.

According to the Federal Bureau of Investigation, who headed up the arrest, on August 4, 2020, a referral was forwarded by the Ohio Internet Crimes Against Children Task Force to the Oregon Police Department who then forwarded the cyber tip to the FBI’s Child Exploitation and Human Trafficking Task Force.

The cyber tip indicated an individual had been utilizing a social media messenger app to upload and/or send to another user or group of users 26 videos or image files of child sexual abuse material, the FBI said.

Investigators determined the IP addresses being used to send and receive the child sexual abuse material, also known as child pornography, belonged to officer Kurp, who lives in Oregon, Ohio. When the FBI looked into Kurp, they discovered he was a police officer.

Two federal search warrants were executed on Tuesday, August 11, 2020, and officials arrested the alleged pedophile shortly after. When the FBI reached out to Kurp’s department, they determined that the images and videos distributed by Kurp were sent when the officer was on patrol.

On Tuesday, Kurp was taken into custody today by members of the FBI’s Toledo Resident Agency’s Child Exploitation and Human Trafficking Task Force without incident.

According to a statement from the Elmore Police Department, after he was arrested, Kurp resigned his position.

The department the reassured the public that not all cops are bad and to maintain their faith in the department in spite of one of them being a pedophile on duty.

Child sexual exploitation is not a crime we take lightly. The staff at the Elmore Police Department are dedicated to the mission of protecting our community. We strive to prevent the shocking allegations against one officer discourage the faith the community has entrusted upon us to protect and serve.

Kurp has since been charged with receipt and distribution of child pornography.

As conservatives push the #savethechildren tag on Facebook, they shamefully look the other way when it is police officers involved. As most people write this off to the “bad apple” fallacy, the fact remains that cops are some of the worst offenders when it comes to preying on children.

As we reported, Sr. Cpl. Daniel Lee Collins allegedly uploaded sexual photos of underage girls to various Google accounts using the City of Dallas internet network, according to the Department of Justice.

According to the federal criminal complaint, Collins, a 35-year-old senior corporal assigned to Dallas Police Department’s Auto Theft Unit, was charged via criminal complaint with transportation of child pornography.

“Law enforcement officers take an oath to protect and serve,” said U.S. Attorney Erin Nealy Cox. “This defendant allegedly undermined that vow, preying upon our most vulnerable. The Department of Justice will not tolerate the exploitation of children – especially by our public servants.”