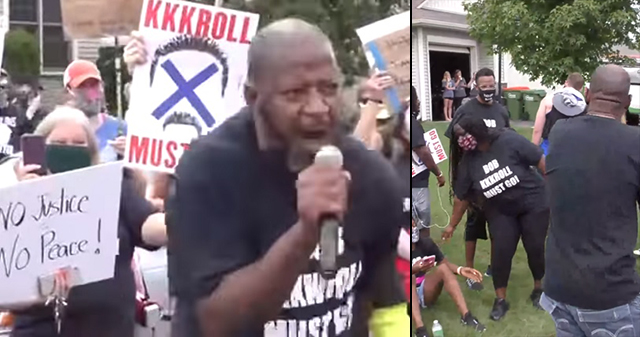 John Thompson, who recently won the Democratic primary for the Minnesota House of Representatives District 67A, was filmed threatening a group of white teenage girls during an unhinged rant at a Black Lives Matter protest on Saturday in a suburb of Hugo, Minneapolis.

A DFL-endorsed candidate for the Minnesota House screamed profanities at a group of teenaged girls during a protest Saturday outside the home of Bob Kroll in Hugo, Minnesota.

“I’m a black man being terrorized by this f–ing Klansman right here,” shouted John Thompson, who won his primary Tuesday for House District 67A. “Y’all got the grand wizard living in your [vulgarity] neighborhood.”

John Thompson, who recently won his Primary for 67A in St. Paul, goes off and screams at neighborhood children, residents, and neighbors of Police Union Leader Bob Kroll.

While he was shouting, Thompson was looking in the direction of a group of four to five teenaged girls who were standing on their front driveway and watching the demonstration. One of their acquaintances was apparently wearing a “blue lives matter” shirt, but had gone back inside.

Thompson was endorsed by the Minnesota DFL Party and Gov. Tim Walz in his campaign for the State Legislature.

More from John Thompson who recently won his Primary for 67A in St. Paul as he yells profanities & anti-police rhetoric w neighborhood children & residents nearby.

“I’ve known John for years. His fierce advocacy and commitment to his community is exactly what’s needed in the State Legislature right now. I look forward to working with him as the next State Representative for 67A,” Walz said in his endorsement.

Gov. Walz in May tried to blame “white supremacists” for the George Floyd riots.

Meanwhile, Thompson proudly boasted that his community was responsible for the riots and threatened that Hugo was next.

“We coming!” Thompson screamed at local residents. “We coming for everything that you motherf***ers took from us … This whole goddamn state burned down for 20 goddamn dollars. You think we give a f*** about burning Hugo down?”

Thompson is a shoo-in and odds are overwhelming he will soon represent the Democratic Party in House District District 67A in St. Paul.

This is endorsed Democrat John Thompson, campaigning for State House in district 67A in St. Paul.

This newly emerged video shows him beating an effigy of the Minneapolis Police Union President and his wife in their own driveway on August 15. pic.twitter.com/oJ90WuEmww