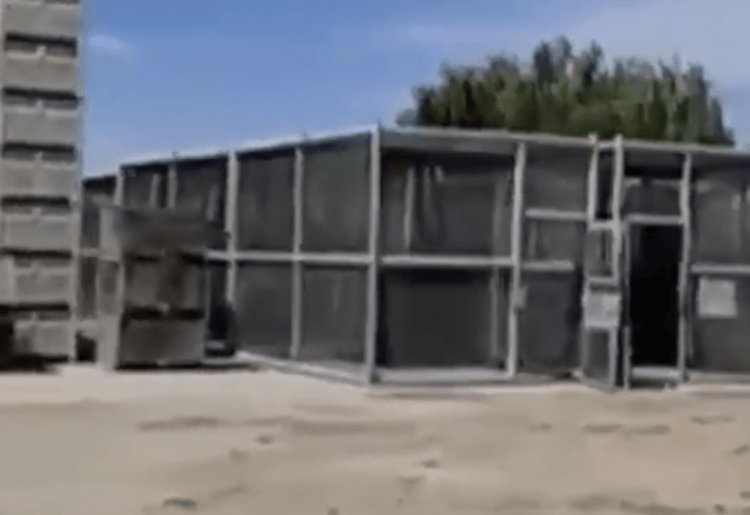 Social media has made a short video go viral that shows what appears to be hundreds of human cages, complete with toilets.  Word got out and reporters started questioning who purchased them, what they were to be used for and if it was indeed in Caruthers, California.  Here’s what we’re being told.

The Fresno County Sheriff’s Office says that it has received several reports about the cages over the past couple weeks.

Callers told dispatchers that they believed the cages were being used for human trafficking victims, field workers or other reasons.

A video showing the cages quickly went viral after being shared to Youtube, which deputies say sparked even more rumors.

Detectives were able to track down the location of the cages and found out that they were once used by the California Department of Corrections & Rehabilitation (CDCR) to provide a safe and secure area for protective custody inmates to participate in outdoor activities.

The metal holding cells or “cages” have been retired and no longer are used. A local metal recycling business ended up buying these cages directly from CDCR.

The holding cells, currently in storage, will eventually be recycled or repurposed by local area farmers to protect agricultural supplies and pumps from theft.

So, the question is, do you believe the Fresno County Sheriff’s Office and their explanation or not?  In this video, there also appears to be some cement constructed building material surrounded.

I’m not sure if this is a recycling center which this is being filmed at or not, but you would think the guys videoing it would have noticed that, wouldn’t you?

In any case, there’s the official story.   Let us know what you think.