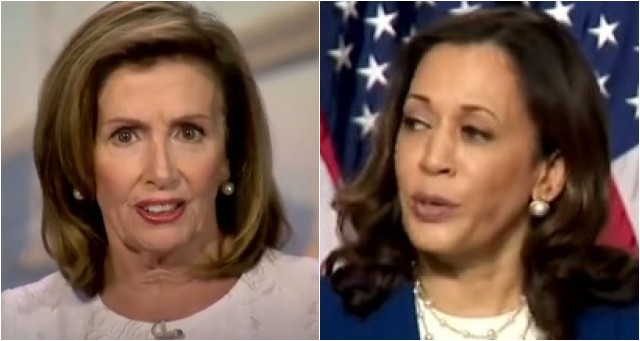 House Speaker Nancy Pelosi on Thursday suggested that she will still be the most powerful elected woman in U.S. politics even if California Sen. Kamala Harris is elected vice president in November, Fox News reports.

During an interview with The Washington Post, Pelosi was asked about Harris’ history-making moment on Wednesday night, when she became the first Black and Indian American woman to accept a major party’s vice presidential nomination.

Pelosi implied that Harris, 55, may not wield much power as vice president.

“Well, I’m not sure how powerful the vice president is,” Pelosi said during the interview.

What an egomaniac narcissist!  Does Pelosi really think she is the most powerful woman in the United States?

“My disappointment is that every time I’m introduced as the most powerful woman in American history, it breaks my heart because I think we should have a [female] president,” she told the Washington Post in March.

Pelosi is truly deranged and her actions and words have proven time and time again that she is horrifically greedy and deranged.

Fox stated, Pelosi’s comments came one day after she spoke at the Democratic National Convention, during which she painted President Trump as an enemy of women, saying she’s witnessed “firsthand Donald Trump’s disrespect for facts, working families and for women in particular — disrespect written into his policies toward our health and our rights, not just his conduct.

This is the same tune that Hillary Clinton was using to try and sway female voters to vote for her during her failed Presidential Campaign run.