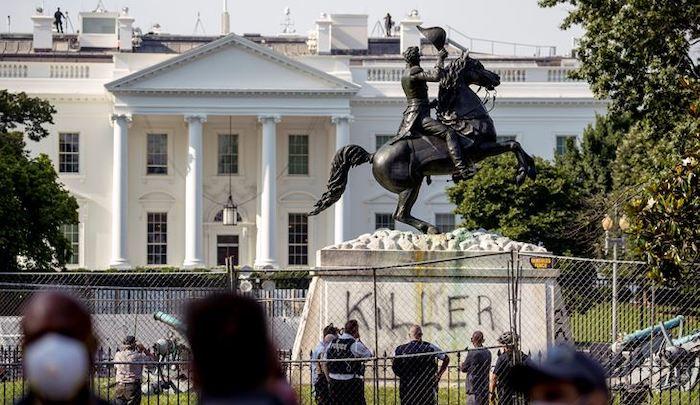 If we’re going to make America great again, we have to know what made it great in the first place. That’s why the Left went into a frenzy of vandalism in tearing down statues earlier this summer, not just of Confederates but of those notable slaveowners Lincoln, Grant, and Frederick Douglass. To repudiate American history is to repudiate America itself.

The reason for this is clear: now is the time for all of us to study and become deeply familiar with American history, because if we do not know what made America great, we will not be able to make it great again. Yet it is safe to say that many, if not most, Americans who deplore what the leftist savages are doing to our monuments only have the most glancing knowledge of how the United States became a beacon of freedom for the world, such that people from all over try to get here despite the Left’s relentless defamation of our country as a bastion of racial hatred and injustice.

Ahistorical myopia and ignorance of history is a significant cause of the current outpouring of hatred for America. To take just one of innumerable examples, leftist rioters and destroyers are enraged at Americans who were memorialized despite being slaveowners. They’re heedless of the fact that slavery was not universally considered a moral evil at the time these men lived, and that there are very likely to be people in future ages who look at our times and scratch their heads and ask each other How could they not have known that was wrong?.

Even more importantly, the leftists are heedless of the fact that the movement to abolish slavery arose in Britain and America because of Christian principles that they despise, while slavery persisted long into the twentieth century in several Muslim countries because of Islamic principles that they profess to respect. Saudi Arabia, a country based strictly upon Islamic law, only abolished slavery in 1962, and North African states including Mauritania and Niger only did so in the early twenty-first century, because of Islamic laws that the leftist rioters would no doubt say it was “Islamophobic” to denounce.

Rating America’s Presidents is an attempt to correct this ignorance of our own history, and to arm Americans to defend the history and heritage of the United States, so as to incline people to defend our country itself. It introduces Americans to unknown heroes of our own history that everyone should know about, including Chester Arthur, who was president from September 1881 to March 1885. Arthur was a champion of civil rights in an age when very few were. When Arthur was twenty-five in 1854, he joined the law firm of Erastus D. Culver, at which he formed part of a legal team that argued successfully for the freedom of any slaves that their owners brought to New York.

Then there is General Ulysses Grant, whose statue in San Francisco’s Golden Gate Park has already been toppled. Grant not only fought against and destroyed the slave power and enacted civil rights laws. From the very beginning of his presidency, he demonstrated a consistent commitment to the equality of rights of all people. He declared: “I have no prejudice against sect or race but want each individual to be judged by his own merit.” Just weeks after taking office in 1869, he approved an act stipulating that the word “white” be struck from all requirements to hold office or serve as a juror in the District of Columbia. When Southern states resisted Reconstruction measures, denied blacks the right to vote, and allowed the Ku Klux Klan to terrorize black populations, Grant sent federal troops to restore order and enforce the law.

Grant’s determination to protect the rights of the freed slaves made him extremely unpopular in the South, and increasingly in the North as well, particularly among Democrats, whose 1868 campaign slogan was “Our Motto: This is a White Man’s Country; Let White Men Rule.” This was their guiding principle throughout Grant’s presidency, and when they won control of the House of Representatives in the 1874 midterm elections, the Democrats were able to stymie almost completely Grant’s efforts to protect the civil rights of black Americans.

Democrats stymying efforts to protect Americans — now, that sounds familiar. Now is the time to learn and cherish this history, and teach it to our children, before leftists manage to erase it entirely.