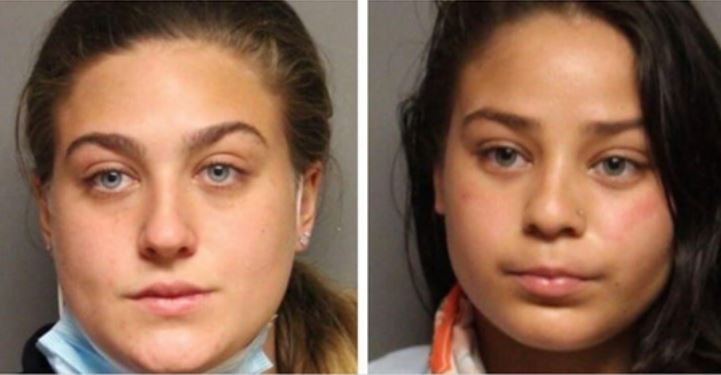 As we previously reported, a sickening video being circulated on social media shows two female Biden supporters stealing a MAGA hat from a Trump-supporting 7-year-old son and tore up her pro-Trump sign near where Joe Biden gave his DNC acceptance speech on Thursday.

The two women have been arrested.

Olivia Winslow, 21, and Camryn Amy, 21, were arrested by Wilmington police Friday and Saturday and charged with robbery, conspiracy and endangering the welfare of a child, according to Delaware Online.

Joe Biden supporters stole Riley’s hat, ripped up his sign & made him cry.
Watch. It’s on video. This is sick.

In the video the young boy can be heard begging his mother to call 9-1-1.

As the victim’s 7-year-old son went to retrieve the hat off the ground, Amy allegedly attempted to stomp on the hat, but stomped on the boy’s hand, according to statements in court records. The little boy wasn’t hurt, but did begin to cry, police said.

Amy was accused of punching a third victim, a man, in the face, resulting in a small laceration to his lip which caused him “substantial pain” the victim told police in court records.

Amy then allegedly threw the MAGA hat over a fence and struck the adult woman in the face with a closed fist, which did not result in injury, court records said.

Amy is facing the same charges as Winslow–first-degree robbery, second-degree conspiracy, and endangering the welfare of a child–along with an additional two counts of offensive touching.

Offensive touching? That’s a new one on me! Must be the politically correct version of assault!

She was committed to the Delores J. Baylor Women’s Correctional Institution in lieu of $45,000 secured bond.

The White House has reportedly called the boy.

We imagine that Riley will be receiving a brand new hat, most likely signed by the president but that is just speculation.

Such peaceful, loving people these leftists are.

The truth is that the Democrats are the party of division, hatred and violence.

So far Joe Biden and his goons have not commented on the attack.

Again, The White House has and that’s just more proof that we are the party of love and civility.

The left? They are nothing but vile piles of crap who hate America.

Be sure to vote RED across the board.