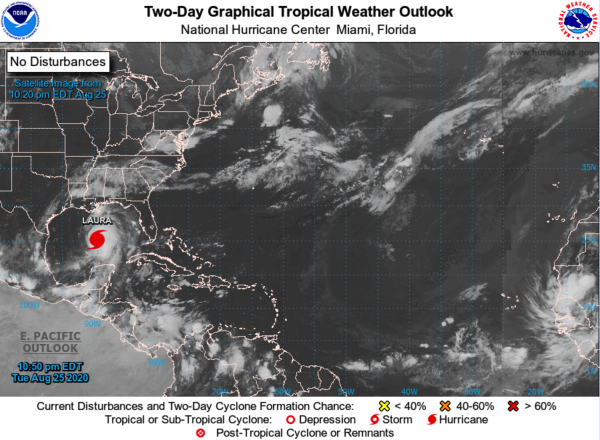 We need to keep a very close eye on this new “monster storm” that is brewing in the Gulf of Mexico.  Laura was officially declared to be a hurricane on Tuesday morning, and at this moment it is projected to make landfall along the Gulf Coast on either late Wednesday or early Thursday.  But before it does, it is expected to undergo a process known as “rapid intensification”, and that just happens to be the exact same process that Hurricane Katrina went through just before it absolutely devastated the city of New Orleans in 2005.  After undergoing “rapid intensification”, meteorologists are expecting Hurricane Laura to come ashore as a category 3 storm with winds “of around 115 mph”…

Hurricane Laura will make landfall as a major hurricane, with winds of around 115 mph and a storm surge up to 13 feet, when it strikes near the Louisiana-Texas border late Wednesday or early Thursday, according to the National Hurricane Center.

At this point, hundreds of thousands of people living along the Gulf Coast have already been evacuated, and we are being told that this storm could cause “devastating damage” to coastal communities…

Laura is expected to become a Category 3 storm, which routinely cause “devastating damage” to homes, trees and infrastructure, according to the National Weather Service. Recent Category 3 storms include Harvey, which hit Texas in 2017, and Rita, which hit Louisiana in 2005.

When Hurricane Katrina made landfall in 2005, it was also a category 3 storm with top winds of approximately 125 mph.

So if current forecasts are accurate, Laura will be a slightly less powerful storm than Katrina was.

But the truth is that we don’t really know for sure what will happen.

Rapid intensification is a highly unpredictable process, and Laura is heading directly into conditions that are extremely favorable…

“The conditions ahead of Laura do favor rapid intensification,” University of Miami researcher Brian McNoldy said.

The phenomenon is typically defined to be a tropical cyclone intensifying by at least 35 mph in a 24-hour period, according to Colorado State University meteorologist Phil Klotzbach.

Hurricanes love warm water, and it is being reported that Laura will be hovering above waters that are very warm for this time of the year…

Seawater in the Gulf is plenty warm, forecasters said, in the neighborhood of 86-88 degrees, according to meteorologist Jeff Masters of Yale Climate Connections. Laura “will have a long stretch of warm waters with high heat content Tuesday night until landfall Wednesday night or Thursday morning, and rapid intensification during that time is a good possibility,” Masters said.

So there is really no telling how powerful Laura could become.

But even if it just ends up being about as powerful as Katrina, it is a storm that you won’t want to mess with.  For those that may not remember, Katrina was one of the worst natural disasters in all of U.S. history.  The following comes from Wikipedia…

Flooding, caused largely as a result of fatal engineering flaws in the flood protection system known as levees[4] around the city of New Orleans, precipitated most of the loss of lives.[5] Eventually, 80% of the city, as well as large tracts of neighboring parishes, were inundated for weeks.[6] The flooding also destroyed most of New Orleans’ transportation and communication facilities, leaving tens of thousands of people who had not evacuated the city prior to landfall stranded with little access to food, shelter or basic necessities. The scale of the disaster in New Orleans provoked massive national and international response efforts; federal, local and private rescue operations evacuated displaced persons out of the city over the following weeks.

To this day, there are some parts of New Orleans that have never recovered from that storm.

On the forecast track, the center of Laura will move across the northwestern Gulf of Mexico on Wednesday. The hurricane should approach the upper Texas and southwest Louisiana coasts on Wednesday evening and move inland near those areas Wednesday night or Thursday morning.

But of course anything could still happen.

Hurricanes often make very unexpected twists and turns, and we have seen frequent examples of this in recent years.

So nobody along the Gulf Coast should be relaxing just yet.

Unlike the pandemic that we are going through, the horrifying economic collapse that we are experiencing and the civil unrest that is raging in our major cities, this is just a temporary crisis.  This storm will soon pass, but more are coming.  September is a key month for hurricanes, and I will be watching developments over the coming weeks with great interest.

And we appear to have entered a time when storms are becoming more powerful and global weather patterns are going absolutely nuts all over the globe.  2020 has already been a banner year for natural disasters, and many believe that the years ahead will be even worse.

But for the moment, the eyes of the meteorological community are all on Hurricane Laura.  At this hour they are telling us that it could be a similar storm to Hurricane Katrina in many ways when it finally makes landfall, and that should deeply alarm all of us.