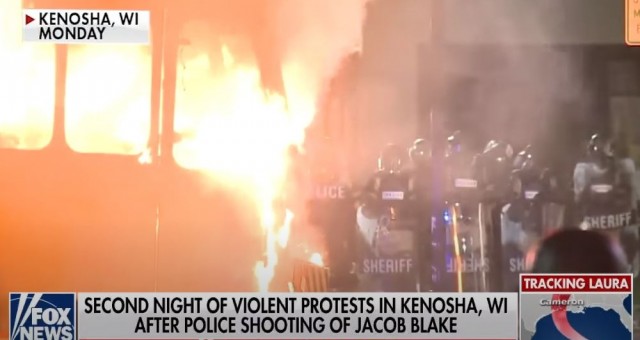 Rioters in Kenosha, Wisconsin shot industrial strength fireworks and hurled dozens of bottles and other objects at National Guard troops who were stationed in front of a courthouse.

Breitbart reports that the Guardsmen were called in by Governor Tony Evers to help local authorities quell an explosion of violence that beset the city after an officer-involved shooting of a black man on Sunday afternoon. By Monday evening, the Guardsmen were in place and helping to secure several local facilities.

“This is a limited mobilization of the National Guard focused on supporting the needs of local first responders to protect critical infrastructure, such as utilities and fire stations, and to ensure Kenoshians are able to assemble safely.   The National Guard is prohibited from blocking people from protesting peacefully.” Governor Tony Evers

Battle rages on between the National Guard and Black Lives Matter rioters in front of the courthouse in Kenosha. pic.twitter.com/eawsng2irl

Shooting breaks out in Kenosha as rioters torch entire businesses.”

The main question is- What is the National Guard authorized to do in response? Well that is a complicated answer and we will do our best to break it down.

(2) The use of force must be restricted to the minimum degree consistent with mission requirements. The use of deadly force can be justified only by extreme necessity. Use criteria will be established by the state staff judge advocate.

That boils down to whatever Rules the State of Wisconsin have put together for the deployment at the time.