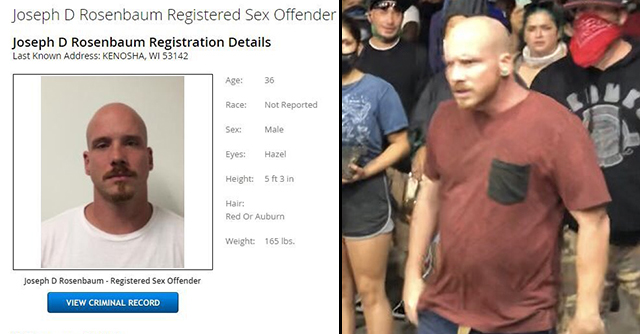 The first assailant who was filmed chasing Kyle Rittenhouse down in Kenosha on Tuesday night and throwing an object at him before charging him like a raging bull and getting shot is a registered sex offender for a sex crime involving a minor.

The 3 shot (2 killed) in #Kenosha, Wisc. at the BLM riot have been identified.

Joseph Rosenbaum, 36, was the first one killed. Video allegedly shows him chasing teen shooter & throwing something at him. Rosenbaum was a registered sex offender for a sex crime involving a minor. pic.twitter.com/up1VgDyrgZ

The Chicago-Sun Times on Wednesday confirmed the man in the videos seen charging Rittenhouse and getting shot in the head and killed was 36-year-old Joseph “Jojo” Rosenbaum.

They failed to mention he is a registered sex offender.

Rosenbaum had charges filed against him for battery, domestic abuse and disorderly conduct just last month, according to WCCA’s public records. Records from Arizona state prison indicate Rosenbaum was classified as a level 3 sex offender (meaning a high risk of reoffending and a threat to the community) and was sentenced to over 12 years in prison.

This is for when he was in PRISON btw. pic.twitter.com/GDhEdtzu5H

Now that it is confirmed Joseph Rosenbaum was one of the people shot and killed by alleged gunman Kyle Rittenhouse in Kenosha, I filmed him earlier in the night taunting the armed civilians, saying, "Shoot me, n***a." pic.twitter.com/Nn2encm78Y

The second assailant seen bashing Rittenhouse with a skateboard while he was on the ground before getting shot has a lengthy record which includes charges of domestic abuse, battery, use of a dangerous weapon and false imprisonment.

Anthony Huber, 26, was shot & killed in Kenosha, Wisc. at the BLM riot. He was filmed chasing down the armed teen and hitting him when he was on the ground with a skateboard. He has a criminal history that includes charges of battery & repeat domestic abuse. #KenoshaRiots pic.twitter.com/1rvx7ltKKS

Anthony Huber’s “partner” Hannah Gittings, who is getting money from GoFundMe’s fundraiser in his name, appears to have a warrant out for her arrest. The GoFundMe for the alleged Kenosha shooter, who many say acted in self defense, was shut down by the platform.

Meanwhile, rioters have used GoFundMe to raise over $1.3 million in bail money.https://t.co/9HYLJi4lYt

The third who was shot (& survived) is Gaige Grosskreutz, 26. He's a member of the People’s Revolution Movement. He was filmed chasing after the teen w/a pistol. He was shot at close-range in the upper arm. He has a criminal record that includes being intoxicated & armed w/a gun. pic.twitter.com/U9Q3R7pcPH

when you’re a communist satanist and some kid won’t let you murder them pic.twitter.com/7kuEoBr7gb

On the other hand, Kyle Rittenhouse is known to be a lover of police and was photographed cleaning up Black Lives Matter graffiti off a high school in Kenosha earlier in the day before he was attacked

Kyle Rittenhouse photographed volunteering to help clean up BLM graffiti in Kenosha earlier in the day, before defending himself against rioters. https://t.co/tmNsqZ4Jod

He was also seen offering medical aid to rioters

Also, he stated why he was armed and there https://t.co/ThS1B0Royo

Kyle Rittenhouse is being charged with first-degree murder.

The guy on the ground was charged with PREMEDITATED murder. How the fuck does that make any sense? pic.twitter.com/JeU0ZgJx69