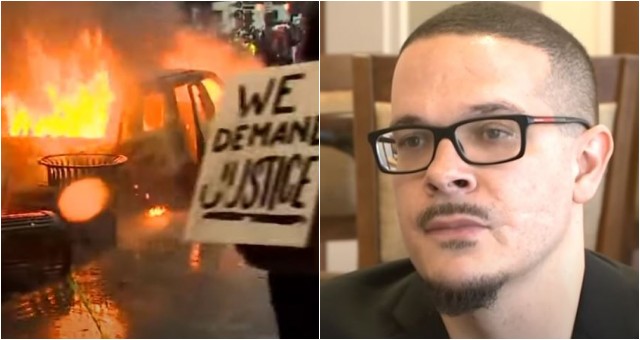 Left-wing activist Shaun King, a.k.a. “Talcum X” continues to hurl his brand of toxicity into Kenosha, Wisconsin, by threatening to dox innocent police officers for his bloodthirsty followers, Breitbart reports.

Sean King is not letting any opportunity pass him by, whatever it takes to get him in the spotlight and his moment of fame.

This time, he focuses on the Kenosha Police Department and Jacob Blake shooting, inciting Black Lives Matter to demand the names of the Police Officers involved withe the incident.

“To the Kenosha Police Department, If you do not name the officer who brutally shot Jacob Blake on Sunday, we will simply begin naming officers from your department who may or may not be him, Fuck it. Your protection of his identity is unethical. What’s his name?”

To the Kenosha Police Department,

If you do not name the officer who brutally shot Jacob Blake on Sunday, we will simply begin naming officers from your department who may or may not be him.

Your protection of his identity is unethical.

King is attempting to throw the names of Police Officers to the rioters and violent Black Lives Matter mob that is causing chaos and violence on a nightly bases since the shooting happened.

When the rioting first broke out in Kenosha Sunday night, King tweeted that he refused to call for peace in Kenosha. “[M]ayhem is the consequence,” he said. “You earned it.”

This puts not only the lives of Police Officers in direct danger but their families as well.  This is unacceptable and endangering innocent lives to feed and fuel Black Lives Matter mobs.

Mainstream media and democratic controlled social media not only allow him to continue but they encourage his rhetoric.

Wow. Congrats on your new job as judge/jury/executioner. Your god-like moral compass must be a heavy burden for you. Thank god you are here for us.