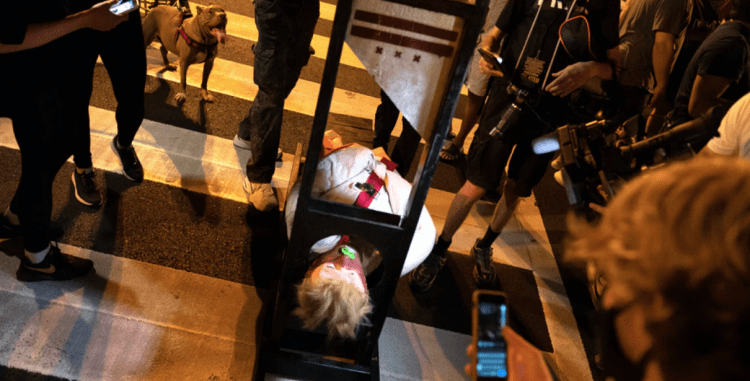 More violent sedition from the degenerate Left. And the MSM exult these terrorists. By the way, this is another example of why the polls are fake. How many people are afraid to admit their support for the POTUS in a poll? The amount must be huge. Not to worry though. We will have justice on November 3rd, 2020.

Someone just put a fake Trump on the guillotine in front of the White House. There’s a piece of paper on him that says “Ticket – Fascist, Rapist, Criminal”@DailyCaller pic.twitter.com/zOmQ7DgIo0

Leftist protesters brought a guillotine with an effigy of President Donald Trump on it to the White House on Thursday, where the president delivered his speech on the final night of the Republican National Convention.

Daily Caller reporter Shelby Talcott said that a piece of paper that was placed on the effigy stated, “Ticket – Fascist, Rapist, Criminal.”

Someone just put a fake Trump on the guillotine in front of the White House. There’s a piece of paper on him that says “Ticket – Fascist, Rapist, Criminal”@DailyCaller pic.twitter.com/zOmQ7DgIo0

During his speech, Trump directly addressed the violent mobs that have sought to intimidate people across the country, as well as the riots and looting that have struck Democratic-controlled cities.

“When Congresswoman Ilhan Omar calls the Minneapolis Police Department ‘a cancer that is rotten to the root,’ Biden wouldn’t disavow her support and reject her endorsement,” Trump said. “He proudly displayed it shortly later on his website, displayed it in big letters. Make no mistake. If you give power to Joe Biden, the radical Left will defund police departments all across America. They will pass federal legislation to reduce law enforcement nationwide. They will make every city look like Democrat-run Portland, Oregon. No one will be safe in Biden’s America.”