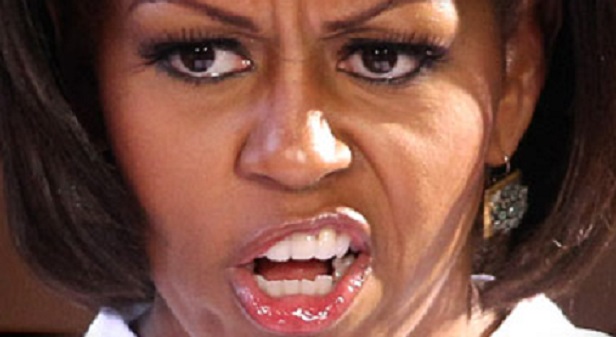 I am so sick and tired of our nation tolerating garbage mouths spewing racism and division in our nation.  Michelle Obama’s comments are racist, you cannot single out “white people” and believe that it is not racist to do so.  Racism is a two way street, and honestly I am seeing more hate and propaganda from the other side of the street!

For so many of us, our friendships have been absolutely critical in helping us get through our toughest days and celebrate our highest highs. And this week on the #MichelleObamaPodcast, I’m talking to a few of my girlfriends: Sharon Malone, Denielle Pemberton-Heard, and Kelly Dibble. Our conversation is a pretty good window into what I love about these ladies. We can reminisce, laugh at each other’s stories, and most of all, we can talk about what’s going on in the world or in our own lives. And with everything that’s been going on over these past few months, it’s been especially crucial for us as women of color to have friends to lean on—a group we can sort through it all together. But to me, this episode isn’t just about my friendships. It’s about yours. It’s about the old friend from school who’s been a confidante for every crucial moment of your life. It’s about the girls who cheered you on during the good times or gave you a shoulder to lean on when times were tough. It’s about the people who know you and support you like no one else. I hope that after listening to this episode, you’ll reach out to them and let them know how much they mean to you. Click the link in my bio to hear this week’s episode with my girlfriends.

“When I’ve been completely incognito during the eight years in the White House, walking the dogs on the canal, people will come up and pet my dogs, but will not look me in the eye. They don’t know it’s me, That is so telling of how white America views people who are not like them, like we don’t exist. And when we do exist, we exist as a threat. And that’s exhausting.”

Got a chip on your shoulder Michael?

During another part of the podcast, Obama recounted how she, daughters Sasha and Malia, and friend Denielle Pemberton-Heard went for ice cream. “We had just finished taking the girls to a soccer game. We were stopping to get ice cream and I had told the Secret Service to stand back, because we were trying to be normal, trying to go in,” Obama recalled. “There was a line, and… when I’m just a black woman, I notice that white people don’t even see me. They’re not even looking at me.”

“So I’m standing there with two little black girls, another black female adult, they’re in soccer uniforms, and a white woman cuts right in front of us to order. Like, she didn’t even see us,” the former first lady continued. “The girl behind the counter almost took her order. And I had to stand up ’cause I know Denielle was like, ‘Well, I’m not gonna cause a scene with Michelle Obama.’ So I stepped up and I said, ‘Excuse me? You don’t see us four people standing right here? You just jumped in line?’”

She added: “She didn’t apologize, she never looked me in my eye, she didn’t know it was me. All she saw was a black person, or a group of black people, or maybe she didn’t even see that. Because we were that invisible.”

The hate and contempt she has for other races is unquestionable at this point and people need to stop tolerating this form of hatred.

Michelle Obama’s comments are more about hate and “poor me, nobody notices me!”, maybe they did recognize you but they simply do not like you because of your hate and clear Islamic relations in our nation.  Maybe it has nothing to do with racism and everything to do about the type of racist, American hating, traitorous human being her and her husband are.