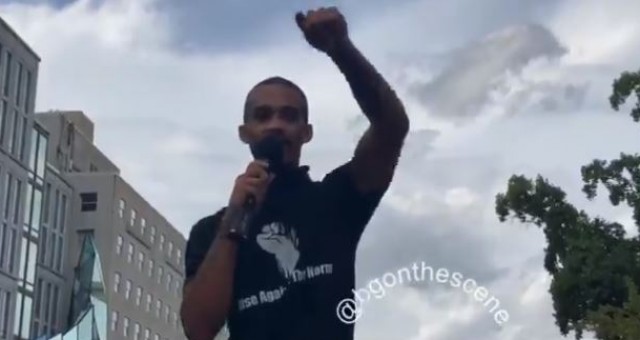 The Black Lives Matter leader from Utah made it to Washington DC for a rally and march on Friday. (Rand Paul said they were funded and sent here from out of state!)

Jim Hoft at Gateway Pundit reports that during his time with the microphone the Utah leader of Black Lives Matter John Sullivan called on BLM to “rip Trump from the White House!”

Black Lives Matter is calling for an open revolution and threatening to go rip the President out of The White House.

I hope they air that live, I have always wanted to see The White House defenses in action and this would be a perfect opportunity.

Charlie Kirk tweeted: “BLM inc. threatening to “rip the president out of the White House” They say they won’t wait until the next election. They’re openly calling for a revolution. This is domestic terrorism on full display, out in the open. They don’t even try to hide it.”

BLM inc. threatening to “rip the president out of the White House”

They say they won’t wait until the next election.

They’re openly calling for a revolution.

This is domestic terrorism on full display, out in the open. They don’t even try to hide it. pic.twitter.com/OyhNSzBEwu

Attorney Lin Wood is urging Americans to “get prepared” because “The revolution has begun!”

I have been urging ALL Freedom Loving Americans to get prepared. To be fearless. To fight back.

The revolution has begun. It is time to fight back to save our Constitution & our country.

This has never been about equal justice for all or reparations, their agenda is to destroy what they call “White America”.

Maybe for some of the peaceful protesters, they truly believe this is about justice and defunding police departments.  But their voice is drowned out by the rest who loot, riot and attack innocent people.

They better be careful what they wish for, because I truly hope people are done tolerating the violence and sitting silently while our nation burns.