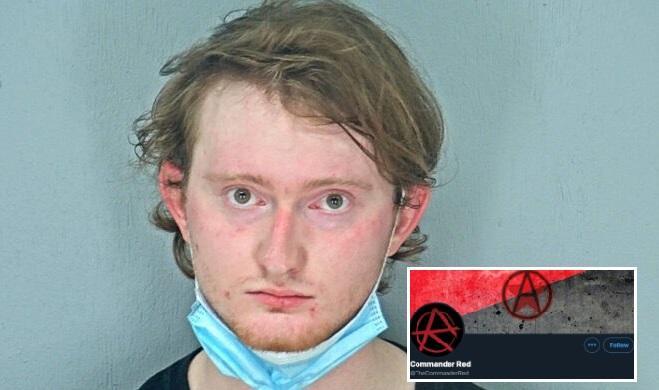 It’s amazing to watch these punk kids in the street intimidating people, assaulting, shouting obscenities and blocking traffic when they finally get a beatdown or arrested. They turn into utter mush. Take this young man who claims to be against fascism while wearing a mask…. oh, the irony. And when he gets busted, what does he do? He curls up like a 2-year-old and cries.

A 23-year-old Wisconsin man carrying a flamethrower, smoke grenades and fireworks during a Saturday night demonstration in Green Bay ‘dropped into the fetal position and began crying‘ after he was chased down by police.

Matthew Banta of Neenah, WI – who is “known to be a violent Antifa member who incites violence in otherwise relatively peaceful protests,” was one of four individuals walking towards a protest with baseball bats, according to ABC2.

Green Bay police say they were called for “a whole bunch of white people with sticks, baseball bats and helmets headed… towards the police” on Walnut St. near Webster Ave.

A responding officer says he saw four individuals walking towards a protest with baseball bats. One man was wearing a metal helmet with goggles and military-style gear with multiple pouches, and was carrying an Antifa flag. When the officer pulled his squad car in front of the group, they ran away. The officer caught Banta, who was carrying the flag, and says Banta “dropped into the fetal position and began crying.” He accused the officer of lying on him; the officer replied nobody was on him. –ABC2

As suspected, Matthew Banta is a hardcore antifa militant. He goes by the online moniker "The Commander Red." Extremely disturbing that he goes to antifa protests armed w/a loaded rifle. He appears to be friends w/violent Portland antifa suspect Alex Dial aka "Beta Cuck 4 Lyfe." pic.twitter.com/6pzD9jywDP

Banta claims he wasn’t planning to incite a riot (with his flamethrower, smoke grenade and fireworks).

The three other individuals Banta was with were caught trying to break into a house. When officers apprehended them, they dropped what they were carrying, with one of them telling the police that they were simply bringing items for self-defense.

Last month, Banta was charged in Waupaca County with second-degree recklessly endangering safety and four other charges for pointing a loaded gun at a police officer, and biting and kicking another.

More evidence of Matthew Banta’s explicit #antifa ties. He’s the militant arrested for allegedly attacking police in Wisconsin with a loaded rifle and knife at a protest. pic.twitter.com/5OeeYflOWc

It ain’t funny now, is it punk?  There should be hundreds if not thousands of these insurrectionists arrested and brought to real justice, not some jail where citizens have to pay for them though.