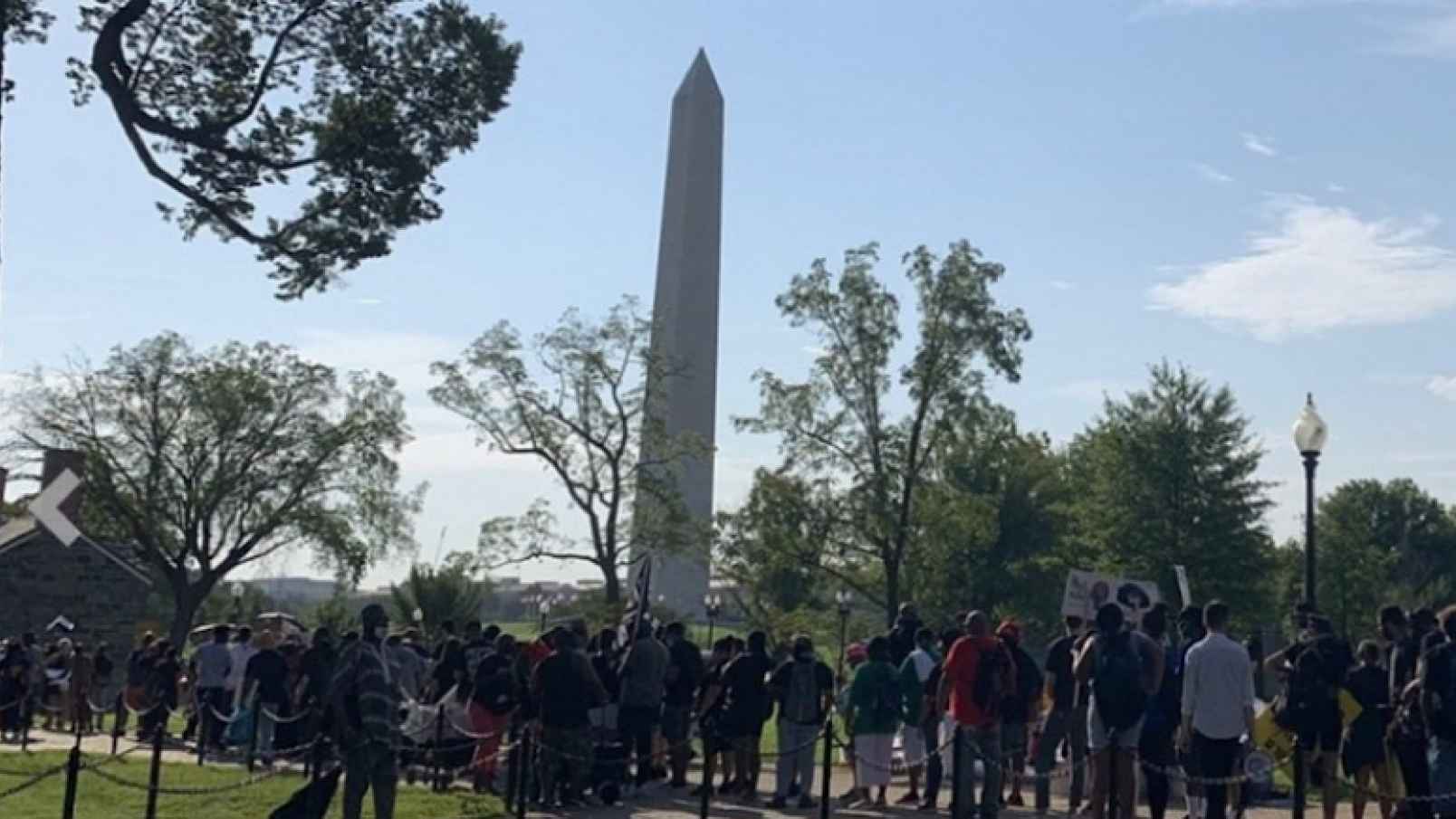 The American Federation of Teachers union boss Randi Weingarten claimed at the union’s annual convention that teachers were so terrified of going back to school that they were “quitting in droves” and “making their wills”.

The AFT threatened that its members would go on strike if they were expected to go back to actually doing their jobs and teaching in a classroom.

In New York City, the United Federation of Teachers, which is affiliated with the AFT, marched with cardboard coffins and fake body bags. Some union teachers wore skeleton t-shirts.

A Halloween skeleton attached to a garbage bag held a cardboard sickle and a message written next to dripping blood, “Welcome Back to School”. “I can’t teach from a cemetery,” one sign claimed. Another declared, “We Won’t Die for the Department of Education.”

Despite their claim that they feared for their lives, the march had little social distancing.

A few weeks after the death march, the AFT’s teachers took a break from making out their wills to get on buses and travel to Washington D.C. to take part in Sharpton’s 50,000 person rally.

The AFT was described as “mobilizing” for the Get Your Knee off Our Necks Commitment March in Washington D.C. which included lots of hate, but few coronavirus precautions.

Photos showed staffers from the country’s second-largest teachers’ union holding signs in close proximity to each other. Randi Weingarten tweeted a photo of herself embracing two other union bosses, elbow bumping Martin Luther King III, posing with the head of the Human Rights Campaign, and then with Al Sharpton, who has one arm loosely draped across her body.

Unless the AFT head shares a household with Sharpton, that’s not social distancing. But photos repeatedly show Sharpton in tight groups of people, sometimes without a mask.

And then Weingarten mounted the podium, and with her mask down, and a huge crowd to her side, began shrieking, “How much pain must black people endure?” However much pain black people have endured, the white union boss’ shrieks could only have added pain and saliva.

At one point, she screamed, “180,000 people dead of COVID” so loudly while flailing her arms that a march volunteer standing next to her stumbled backward.

If Weingarten were infected, she might have killed more black people than the police ever did.

Meanwhile, the UFT was “advising members to not enter school buildings for anything other than retrieving classroom materials and supplies” because it’s too just dangerous.

Weingarten had claimed that teachers were so scared of going back to work that they were, “writing their wills.” But there was nothing to be afraid of in a mob of Sharpton’s racists.

While Sharpton’s National Action Network had claimed that the D.C. rally would be socially distanced, photos repeatedly show that was not true with participants clumped closely together.

As I demonstrated in my original expose of the rally plans, it would take an area the size of 300 football fields to allow for a socially distanced rally of 100,000 people in front of the Lincoln Memorial. The NAN reduced its projected number to 50,000 when filing for a permit with the National Park Service. But that’s still way too many football fields to fit into that space.

The Get Your Knee off Our Necks Commitment March’s pandemic precautions consisted of theater like temperature checks and sanitation areas. A mobile testing tent appeared to be unused while in the 90 degree temperatures many attendees dropped their masks and gulped air and water in equal measures. The barriers made things worse with a huge crowd being confined to the area around the Lincoln Memorial Reflecting Pool packed cheek to cheek.

Some waded into the water to cool off and get a better view of the stage set up on the steps.

While yellow banners attached to the barricades ordered people to stay 6 feet apart, few were listening or could even do it. In the intense heat, some marchers passed out and crowds gathered around them. Things weren’t much better at the podium with a large number of family members of deceased criminals crowding around and people walking past them to take selfies.

Despite that, and Sharpton’s racist history, the rally included a taped message from Senator Kamala Harris, the Democrat VP nominee, and support from Governor Andrew Cuomo.

And there was plenty of participation from teachers who claim they’ll die if they go back to work.

The coffin and body bag parades are being brandished by unions to terrorize parents, even while the unions cheer on tens of thousands of black nationalists squeezing together in D.C.

The Milwaukee Teachers’ Education Association had made their own coffins of children to terrorize parents into keeping schools closed. The ghoulishly vile messages on them included,  “Here lies a third grade student from Green Bay who caught COVID at school”

The union’s Twitter claimed that, “It isn’t a matter of if students and staff at in-person schools will get sick, it’s a matter of when”, even while it kept on promoting Black Lives Matter rallies.

It even retweeted a photo of the massive crowd for Sharpton’s 50,000 “Get Your Knee off Our Necks Commitment March” rally where everyone was closely crowded together.

“This is how many people showed up to the #MarchOnWashington today,” the tweet read.

Teachers’ union members claim that every single one of them will die if they have to set foot in a classroom, and will take all the children and their grandparents with them just like Jonestown. Meanwhile, they aren’t making out their wills when they head off to a Black Lives Matter rally.

The union’s own protests have repeatedly involved teachers crowding into small spaces to protest against school leadership and elected officials, even while claiming they’re about to die.

If the AFT’s boss and its staffers can head out to D.C., pal around with Sharpton, and then speak to a crowd of tens of thousands, its members can go back and teach school in-person.

You can’t travel around the country, crowd into protests, and then claim teaching will kill you.

The American Federation of Teachers, which has been holding school districts around the country hostage, doesn’t care about safety. It isn’t holding out because it cares about students, but because it wants power and it has the ability to shut down the entire education system.

This corrupt system, in which the Democrat activists of the AFT claim that they care so much about the kids that they refuse to teach them every time they want more money, has hit its peak.

Parents around the country are paying a fortune in taxes to subsidize the salaries of AFT hacks. They’re no longer even paying for a miserably substandard social justice education. These days they’re often paying for an online session even as the unions and the districts want higher taxes.

If Randi Weingarten can hug Al Sharpton in person, AFT’s hacks can go back to school.