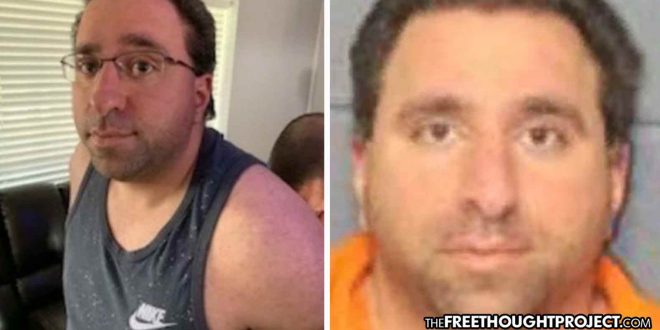 LaPlace, LA — During a joint investigation into child sex abuse by the Louisiana attorney general’s office, the Louisiana Bureau of Investigation’s Cyber Crime Unit and the St. John the Baptist Sheriff’s Office, authorities made several arrests, including one of their own deputies, who now faces dozens of disturbing charges.

Avo Marzwanian, 34, of LaPlace, is charged with 10 counts of distribution and 20 counts of possession of child pornography involving juveniles under the age of 13, the attorney general’s office said. But that’s not all, apparently this deputy didn’t limit his abuse solely to children and was also charged with 15 counts of sex abuse against animals.

Another man, who was not one of St. John the Baptist Parish’s finest was arrested during the investigation as well. Joseph Guillory, 35, also of LaPlace, is charged with 50 counts of possession of child pornography involving juveniles under the age of 13.

According to the office’s records, Marzwanian worked for the correctional department for 12 years before completing the field training program in June.

“You were chosen for this program … because your commanders see you as leaders,” Sheriff Mike Tregre said to Marzwanian when he graduated from the department’s field training officer program in June. Sadly, Tregre was wrong. Marzwanian is not a leader in any way as he preys on society’s most vulnerable.

“Crimes against children are among the most heinous acts imaginable. My office and I will continue doing everything we legally can to find and arrest child predators throughout our State,” AG Jeff Landry said. “I am grateful for our law enforcement partners who assist us in protecting Louisiana’s children. Together, we will make our State a safer place.”

Marzwanian is currently being held in the St. John the Baptist Detention Center on a $350,000 bond. The very place where he used to work is now holding him captive for his horrific alleged crimes against children and animals. Ironic justice indeed.

What’s more, Marzwanian faces the animal sex abuse charges too, which is also not uncommon. In fact, in the same state, in Livingston Parish, TFTP reported on a high level Livingston Parish Sheriff’s Office deputy — who commanded the SWAT team — and his wife, who were indicted on more than 150 felonies for unspeakable crimes against children and animals. Dennis Perkins, 44, and and his wife Cynthia Perkins, 34, are accused of multiple counts of child rape and the production of child pornography, among other disturbing charges.

As TFTP reported in October, the Perkins were arrested after a months-long criminal probe headed up by the Louisiana Attorney General’s Office. Then in December, a grand jury indicted Dennis Perkins on 78 felonies and his wife, Cynthia Perkins, on 72 felonies — involving sex acts against children under the age of 13, “two non-consenting adults, various unsuspecting victims by means of ingesting harmful substances and an animal,” according to court filings. The indictment also includes 61 counts of producing child pornography.

Also, according to the Advocate, the pair both face a count of mingling harmful substances, which involves putting harmful substances in food, drink or medicine with intent to hurt someone. According to the indictment, Perkins is accused of ejaculating on various pastries and into bottles of energy drinks that were then ingested by unsuspecting victims. Cynthia is accused of giving them to students at the school in which she was a teacher.