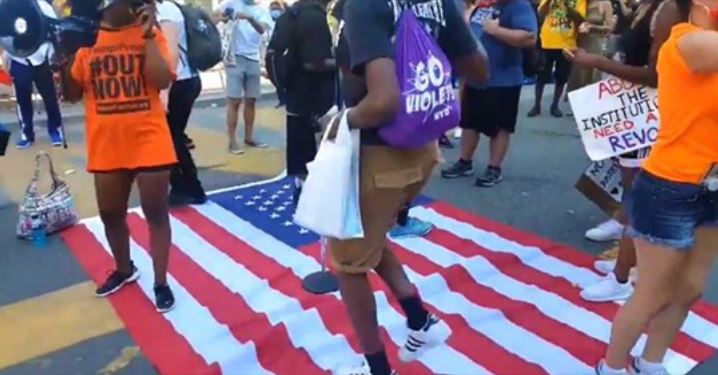 At the direction of President Trump, the White House Office of Management and Budget will move to identify and eliminate any trace of “critical race theory” in the federal government, Breitbart reports.

Critical race theory is the leftist, racist doctrine that forms the intellectual underpinnings of Black Lives Matter, Antifa, and other radical organizations currently engaged in unrest on America’s streets.

According to the release by The White House, federal training seminars actually called white people all supremacists and benefit from being white.  Think about that, federal employees were getting racial training aka indoctrination that whites were bad and black and Hispanic needed special treatment.

Russ Vought, director of the Office of Management and Budget, announced on Twitter that the Trump administration will bring any dabbling in such theories by the federal government to a swift end.

The days of taxpayer funded indoctrination trainings that sow division and racism are over. Under the direction of @POTUS we are directing agencies to halt critical race theory trainings immediately.https://t.co/dyMeJka9rt

Here’s the the text of the memo sent out by OMB:

“It has come to the President’s attention that Executive Branch agencies have spent millions of taxpayer dollars to date “training” government workers to believe divisive, anti-American propaganda.

For example, according to press reports, employees across the Executive Branch have been required to attend trainings where they are told that “virtually all White people contribute to racism” or where they are required to say that they “benefit from racism.” According to press
reports, in some cases these training have further claimed that there is racism embedded in the belief that America is the land of opportunity or the belief that the most qualified person should receive a job.

These types of “trainings” not only run counter to the fundamental beliefs for which our Nation has stood since its inception, but they also engender division and resentment within the Federal workforce. We can be proud that as an employer, the Federal government has
employees of all races, ethnicities, and religions. We can be proud that Americans from all over the country seek to join our workforce and dedicate themselves to public service. We can be proud of our continued efforts to welcome all individuals who seek to serve their fellow Americans as Federal employees. However, we cannot accept our employees receiving training that seeks to undercut our core values as Americans and drive division within our workforce.

The President has directed me to ensure that Federal agencies cease and desist from using taxpayer dollars to fund these divisive, un-American propaganda training sessions. Accordingly, to that end, the Office of Management and Budget will shortly issue more detailed guidance on implementing the President’s directive. In the meantime, all agencies are directed to begin to identify all contracts or other agency spending related to any training on “critical race theory/9 “white privilege,” or any other training or propaganda effort that teaches or suggests either (1) that the United States is an inherently racist or evil country or (2) that any race or ethnicity is inherently racist or evil. In addition, all agencies should begin to identify all available avenues within the law to cancel any such contracts and/or to divert Federal dollars away from these un-American propaganda training sessions.

The President, and his Administration, are fully committed to the fair and equal treatment of all individuals in the United States. The President has a proven track record of standing for those whose voice has long been ignored and who have failed to benefit from all our country has to offer, and he intends to continue to support all Americans, regardless of race, religion, or creed. The divisive, false, and demeaning propaganda of the critical race theory movement is contrary to all we stand for as Americans and should have no place in the Federal government.”

Leisa Audette at 100 Percent FED Up has more:

Tucker Carlson recently exposed the training of federal officials during an interview with reporter Christopher F. Rufo who investigated the program. President Trump just tweeted out that this divisive program has officially ended:

Christopher F. Rufo’s investigations that called attention to critical race theory are at the link below. Rufo called on the president to put an end to his divisive training on Tuesday’s Tucker Carlson Tonight, and he did.

And here is the Tucker segment from Tuesday that set the wheels in motion.https://t.co/AbV6gOb0SF

Christopher F. Rufo is an American hero for his investigation into this anti-American program. He’s responsible for putting an end to it, along with President Trump’s immediate action.

Rufo pointed to several of his own findings, including that Sandia National Laboratories — which designs nuclear weapons — held a mandatory retreat titled, “White Men’s Caucus on Eliminating Racism, Sexism, and Homophobia in Organizations,” Fox News reports.

Rufo claims to have found instances of similar trainings across a long list of federal agencies, including the FBI.

Next, the education system in America needs to purge this “sickness” from its classrooms. A recent report, ‘California’s Radical Brainwashing Curriculum Soon To Be Mandatory,’ discusses the move by the state of California to make teaching the ‘1619 Project’ to students mandatory. The 1619 Project rewrites American history from a black perspective of victimhood and oppression:

A new California bill would establish a K-12 curriculum mandating classes in the ‘four I’s of oppression,’ ideological, institutional, interpersonal and internalized. The bill has sailed through the Senate, and Governor Gavin Newsom is expected to sign it, according to a WSJ Editorial. So instead of the three “R’s”, it’s the four “I’s”…

That is totally unacceptable!

But, overall this is great news but will take a long time to heal the wounds created by the federal government indoctrination.  This brings us to the school systems, colleges,  all critical theories courses (gender, feminist, LGBTQ, etc), which are nothing but grievance studies courses, need to be eliminated.

They are using indoctrination to our youth in cultural Marxism that causes division and violence in the streets.