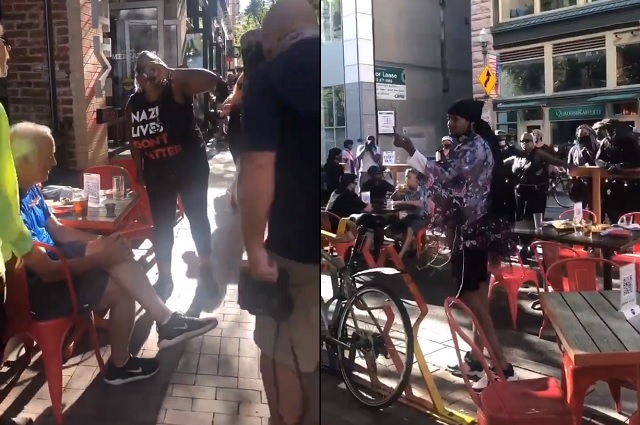 Black Lives Matter rioters on Sunday were filmed screaming “f**k white people” and “f**k the police” at an elderly white couple dining outside at a restaurant in Pittsburgh and then assaulting a white man in the street.

Video shows an African-American agitator screaming “f**k 12” and “f**k white people” at a white couple before giving them the finger.

An African-American woman of size in a “Nazi Lives Don’t Matter” shirt then approaches their table, steals one of their drinks (which looks to be a beer) and downs it as the couple reacts in shock.

“F**k 12” the first agitator shouts as he slams at table, breaking a glass in the process.

Another video from the same riot shows the mob attacking a white guy walkign with a bicycle, first slamming a megaphone in his face then bashing him with a skateboard after he swatted the man’s megaphone away.

Police were nowhere to be seen.

All the assailants could be easily identified if the District Attorney wanted to pursue charges but it’s a Democratic s-hole so odds are they’ll look to charge the white bicyclist for defending himself.

9/5/20 Pittsburgh, PA | Protesters stop at a restaurant whose owner previously criticized protesters: “You won’t get no peace.”

*NEW* BREAKING: 92 Months In Prison… Does His Name Explain It Or No?
America's Freedom Fighters

White House Urging Girls Under 15 to Get Abortions Without Telling Parents
June 30th, 2022 The Lid

12 Things you need to survive a power grid collapse