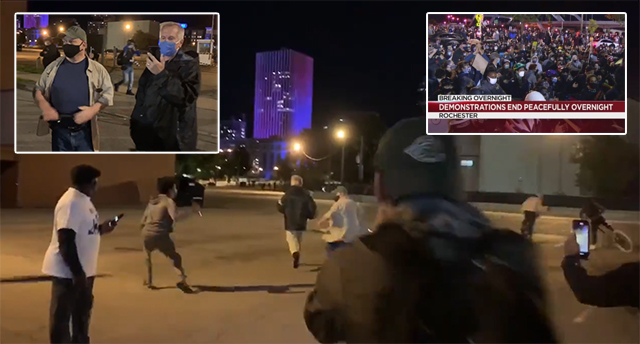 WHEC reporter Charles Molineaux was attacked and chased by a knife-wielding Black Lives Matter mob during “protests” on Sunday night in Rochester and yet his own news station ignored the incident and described the night’s “protests” as “peaceful” on their front page.

Video shows Molineaux and his security guard getting attacked and called “Nazis” after apparently getting accused of being undercover cops.

An African-American man with a knife is seen running at them and threatening to stab them repeatedly, only backing down when Molineaux’s security guard turns around to defend him with an expandable baton.

Two men were discovered to have infiltrated the group during tonights march in#rochester NY.

They were suspected please officers, but that is not confirmed. The two men fled when confronted.#rochesterprotests #roc pic.twitter.com/kKFQsyEwyt

Demonstrators now attacking us outside the public safety building. pic.twitter.com/VqQybiNskn

Taking pictures for Twitter.
In fact you can see some of them in the tweets from BEFORE we had our little misunderstanding.

Seems someone thought we local news folks were Some kind of undercoverinfiltrators.
Came after us.
My security buddy got away with a few bumps. He’s OK. Calmer here on the outskirts now.

Accused us of doxxing them. My security pal hustled us away as they hit him.
He’s okay.
Apparently lost interest after we got some distance.

Here’s screenshots of the knife: The story itself, titled “Fifth night of Daniel Prude protests” and updated at 4:47 AM, made no mention of Molineaux and his security guard being attacked and chased out of the area by a violent knife-wielding BLM mob.

News stations will throw their own reporters under the bus (and reporters will take a knee) in service of the narrative.

I reached out to WHEC for comment to ask why they ignored their own reporter being attacked and described the protests as “peaceful” but did not receive an immediate response.