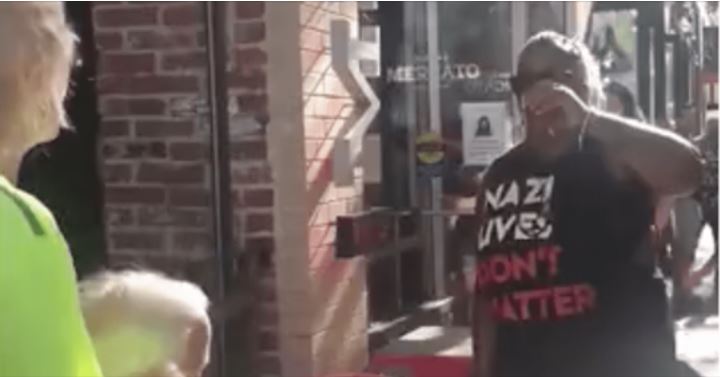 The nightly rioting by the radical leftist militants BLM and Antifa continue to rock the nation almost exclusively in Democrat run cities and states.

Democrats don’t appear to give a crap about this mayhem and destruction but I guarantee you that they will NOT be getting bailed out for their incompetence by our great president.

You broke it- you fix it you liberal dirtbags.

People are getting killed for God’s sake and for what? These idiots don’t even know why they are rioting but they sure enjoy doing it and it looks like there’s no end in sight.

That being said, we wanted to report on an incident that took place in Pittsburgh, Pennsylvania on Sunday.

Normal people were trying to enjoy some food and drink at a restaurant and got ambushed by these thugs.

Black Lives Matter ‘protesters‘ yelled obscenities and terrorized an elderly couple presumably because they were white.

The BLM crowd swarmed the outdoor dining area as one woman wearing a “Nazi Lives Don’t Matter” t-shirt drank an elderly man’s beer while someone else smashed a glass, 100 Percent FED Up reports.

Other violent Biden supporters were breaking glassware and intimidating other diners.

Videos of the crazies are below. I warn you they feature offensive language, overt racism and deeply troubling individuals, Illicit Info OPINION Blog reports.

The mob also assaulted a man who was carrying his bike down the street. Again we do not see what happened before the assault, but I’m gong to guess that the man was minding his own business.

This garbage makes my blood boil!

These thugs are animals!

There is a silver lining out of all of this I suppose. The more this happens, the more people realize that the only chance we have of not letting the unhinged mob take full control of the power structure, is to vote for … yup, ‘you know, the President’, again.