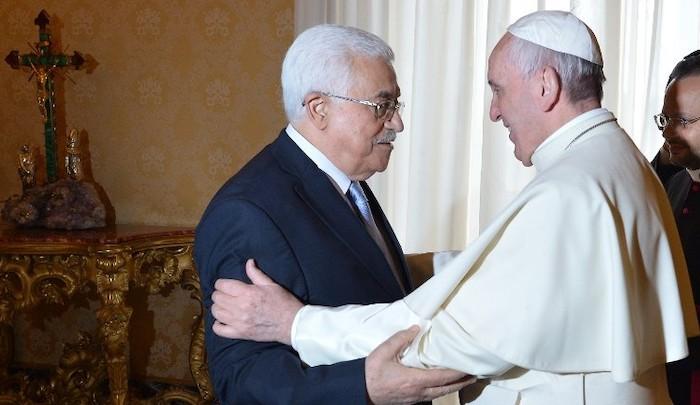 Pope Francis’ new encyclical, Fratelli tutti: sulla fraternità e l’amicizia sociale (“All Brothers: On Fraternity and Social Friendship”) will be issued on October 3, the Vatican confirmed Saturday. According to Church Militant, the encyclical is “a sequel to his controversial Abu Dhabi pact with Grand Imam Ahmad al-Tayyeb last year, and will cite Abu Mazen [Mahmoud Abbas], a Palestinian backer of terrorism, as an example of ‘peace’ and ‘fraternity.’” No, this is not the Babylon Bee; this is real.

It gets even worse. According to Vatican News, “The theme of fraternity is also present in [the Pope’s] constant embrace of migrants, epitomized in his pastoral visit to Lampedusa. His signing of the Document on Human Fraternity in Abu Dhabi in 2019 marks one more example of Pope Francis’ dedication to promoting brotherly love.”

Brotherly love. As I told Church Militant, Mahmoud Abbas has made it abundantly clear over the years that he doesn’t want peace, but the total destruction of Israel as a Jewish state and the eradication of all Jews from the region. After two jihad groups, the Mourabitoun and the Mourabitat, began violent riots on the Temple Mount in September 2015, he applauded: “We bless you; we bless the Mourabitoun and the Mourabitat. We welcome every drop of blood spilled in Jerusalem. This is pure blood, clean blood, blood on its way to Allah. With the help of Allah, every shaheed (martyr) will be in heaven, and every wounded will get his reward. All of their steps, we will not allow them. All these divisions, Al-Aqsa is ours, and the (Church of the) Holy Sepulcher is ours, everything is ours, all ours. They (the Jews) have no right to desecrate them with their filthy feet and we won’t allow them to.”

Sultan Hussein Tabandeh, the Shi’ite author of A Muslim Commentary on the Universal Declaration of Human Rights, agrees, stating:

Thus if [a] Muslim commits adultery his punishment is 100 lashes, the shaving of his head, and one year of banishment. But if the man is not a Muslim and commits adultery with a Muslim woman his penalty is execution. … Similarly if a Muslim deliberately murders another Muslim he falls under the law of retaliation and must by law be put to death by the next of kin. But if a non-Muslim who dies at the hand of a Muslim has by lifelong habit been a non-Muslim, the penalty of death is not valid. Instead the Muslim murderer must pay a fine and be punished with the lash. … Since Islam regards non-Muslims as on a lower level of belief and conviction, if a Muslim kills a non-Muslim, then his punishment must not be the retaliatory death, since the faith and conviction he possesses is loftier than that of the man slain…Again, the penalties of a non-Muslim guilty of fornication with a Muslim woman are augmented because, in addition to the crime against morality, social duty and religion, he has committed sacrilege, in that he has disgraced a Muslim and thereby cast scorn upon the Muslims in general, and so must be executed. … Islam and its peoples must be above the infidels, and never permit non-Muslims to acquire lordship over them.

But the Pope’s encyclical is certain to ignore all of this, and it is likely that the pontiff is completely unaware of it. The encyclical will mislead millions of Catholics into a complacency that could be fatal.

“Leave them; they are blind guides. And if a blind man leads a blind man, both will fall into a pit” (Matthew 15:14).