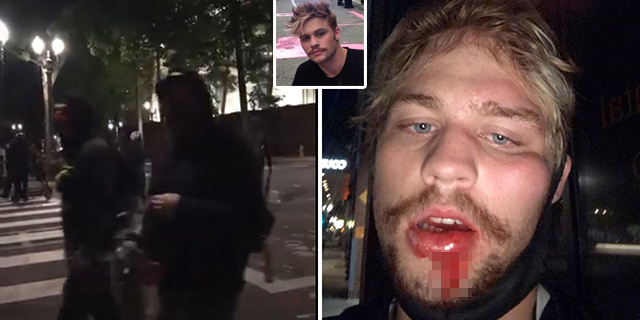 It started with a press member recognizing me, he proceeded to get on his phone to show a group of Black Bloc what I believe to be my Instagram.

I fled and changed my disguise, and returned once they had arrived at a different location. pic.twitter.com/RfcfFMdopm

I believe this post is what exposed me after changing my attire— pic.twitter.com/RIDVrGk6eS

As I was standing on the corner two suspicious men were looking at me and talking amongst themselves, they walked by and directly addressed me by my name.

Here’s the video of them acknowledging my presence. pic.twitter.com/HllDYWyCBT

I began walking away, a few blocks down there was a group of four dressed in Black Bloc waiting for me around the corner.

They proceeded to beat me. I was punched in the face, thrown on the ground where they began kicking me in the back and hitting me in the face again. pic.twitter.com/l8fx1omAAv

Does this look peaceful to you? pic.twitter.com/gT97KIvKxG

CNN will say it was a mostly peaceful beating

Though CNN and the rest of the media will whine incessantly about President Trump’s “attacks” on journalists (because he criticizes them), they couldn’t care less about antifa and Black Lives Matter rioters physically attacking journalists on the daily.

As I reported earlier this week, the Rochester station WHEC ignored their own reporter and his security guard being attacked and chased by a knife-wielding Black Lives Matter mob on Sunday and described the night’s protests as “peaceful.”

Tayler Hansen’s story wasn’t picked up by a single website indexed by Google News as of Thursday morning other than the Canadian site The Post Millennial, which works with Andy Ngo.

Not only will journalists not stand up for folks like Ngo, Hansen and others but they’ll actively work with antifa to dox them so they can be attacked!