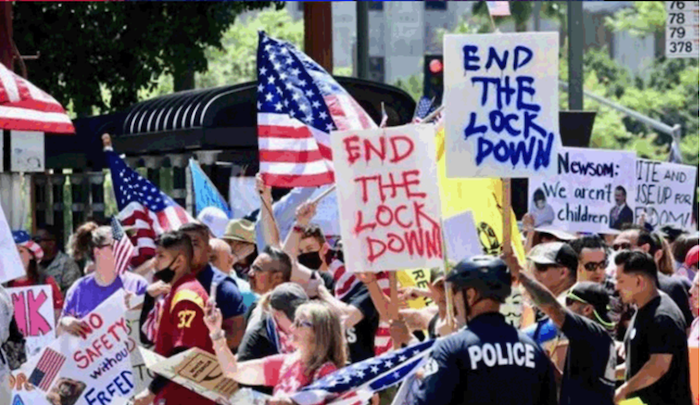 The far-Left hate site Raw Story took the opportunity of the 19th anniversary of the September 11, 2001 jihad terror attacks that killed nearly 3,000 people to advance the claim that nowadays, the foremost threat the nation faces is not from jihadis, but from – you guessed it – “far-right white supremacists who love Trump.” It’s as predictable as it is absurd.

The Raw Story piece, written by Alex Henderson and picked up from the even loonier AlterNet, claims that “although the 9/11 terrorist attacks underscored the dangerous fanaticism of far-right Islamist groups, countless Republicans and supporters of President Donald Trump have ignored or downplayed another terrorist threat from the far right — white supremacy and white nationalism — and that threat is alive and well in the Trump era.” Who, according to Henderson, are these alleged white supremacists? Raw Story illustrated his article with a photo of Americans in California protesting the coronavirus lockdown hysteria. It doesn’t take much to make you the equivalent of the KKK these days.

Henderson’s bogeymen are as predictable as his slant: “And anti-Islam extremists like Jihad Watch’s Robert Spencer and his ally, Pamela Geller, would have us believe that the terrorist threat posed by white supremacists and white nationalists and the terrorist threat posed by Islamist groups are in no way comparable. But one need only look at the history of white supremacist terrorism to realize how ignorant that claim is.”

“Extremist” is a carefully chosen word. During the Obama administration, it became the intelligence community’s favored euphemism for Islamic jihadis. By smearing Pamela Geller and me with the same label, Henderson is essentially saying that she and I are terrorists – the flip side of the Islamic jihadis, the “far-right” terrorists who prove that there are “extremists” of all creeds, and that the problem of “extremism” is not limited to Islam alone.

This is not only defamatory, as neither Pamela Geller nor I have ever advocated, justified, approved of, or applauded any violence, but it paints a large target on our backs for anyone who decides to strike out against the “extremist” threat, and makes us vulnerable to being shut down by the social media giants (which is, of course, already happening) in their efforts to curb “extremism.”

But even worse is that Henderson’s claim here, if believed, will lead people to discount an actual threat in favor of a chimera, a threat that is minuscule but has been immensely exaggerated for political purposes. White supremacists do not exist in sufficient number, so Alex Henderson and his cohorts have to invent them.

A moment’s consideration shows how absurd the idea that there is a “far-right” threat that dwarfs the jihad threat really is. After all, just look at what the damn white supremacists are doing in Nigeria and Pakistan. Remember the MAGA-hat-wearing thugs who are rioting in Sweden over Trump cartoons, and the Trump “Grab Em By The —” gangs that are running rampant in Britain, and the white supremacist migrants who are responsible for a massive crime wave in Europe.

Of course, there are no such people, but Islamic jihadis and supremacists are doing all of that and more. And besides being ridiculous, Henderson’s claim isn’t even original. Rep. Ilhan Omar (D-Minn.), in a 2018 interview, fed the fires of the “white supremacist terror” hysteria when she asserted that “our country [no, not Somalia] should be more fearful of white men across our country because they are actually causing most of the deaths within this country.” Omar also offered a ready solution: “Profiling, monitoring, and creating policies to fight the radicalization of white men.”

It doesn’t. One major problem with the Government Accountability Office study leaps out from page 6 of its report, where you will see that the count of fatalities committed by “far right wing extremists” and “radical Islamist extremists” begins on September 12, 2001. Why was that day chosen? Why not start the study at the beginning of a year, or of this century?

The answer is clear: if the GAO had gone back one more day, the number of Americans killed by Islamic jihadists would have been several thousand more than those killed by “far-right violent extremists.” The GAO obviously started its study on September 12, 2001, in order to manipulate the results so as to exaggerate the terror threat from the “far-right” and minimize it from Islamic jihadis. This is a “study” that was conducted in order to justify a predetermined conclusion, not a genuinely dispassionate search for the truth.

What’s more, the study doesn’t take failed plots into account. At Jihad Watch, I’ve tracked jihad activity in the United States and around the world every day since October 2003. In the course of that nearly sixteen-year span, I’ve posted hundreds of reports on failed jihad plots inside this country. No one was killed or injured in those, and for that we can all be grateful. But if those plots had succeeded, there would have been hundreds and possibly thousands more fatalities of Islamic jihad activity.

Those failed plots are quickly forgotten. But they shouldn’t be, especially in considerations of which threat to Americans is larger. It should also be noted that there is nowhere near an equivalent number of foiled plots by “far-right violent extremists.” Most Americans have no idea how determinedly jihadis are continuing to attempt mass murder inside the United States.

Even worse, the GAO study doesn’t take into account the fact that there is a global network of Islamic jihadis. They are found on every inhabited continent. Major jihad organizations such as al-Qaeda and the Islamic State have repeatedly called upon Muslims to murder Americans.

By contrast, there is no global network of “right-wing extremists,” and they have not called for the indiscriminate murder of American civilians.

As ubiquitous as this propaganda is, insistent repetitions of Big Lies doesn’t make them true – even when they’re repeated by that saintly victim, Ilhan Omar, and her obliging establishment media stooges such as Alex Henderson of AlterNet.

Robert Spencer is the director of Jihad Watch and a Shillman Fellow at the David Horowitz Freedom Center. He is author of 21 books, including the New York Times bestsellers The Politically Incorrect Guide to Islam (and the Crusades) and The Truth About Muhammad. His latest book is Rating America’s Presidents: An America-First Look at Who Is Best, Who Is Overrated, and Who Was An Absolute Disaster. Follow him on Twitter here. Like him on Facebook here.

Biden’s Enviro Plan Could Eliminate Up to One Million American Jobs
January 25th, 2021 The Lid

Making A Prey Of Americans: Biden Creating Domestic Insurrection – Releasing Illegals Back Onto The Streets Of America
January 25th, 2021 Sons of Liberty Media

Biden Orders Release Of All Illegal Aliens In Custody – Upwards...

Why is Bill Gates buying up farmland across America?

Biden and Harris blatantly lied when they said before the election...