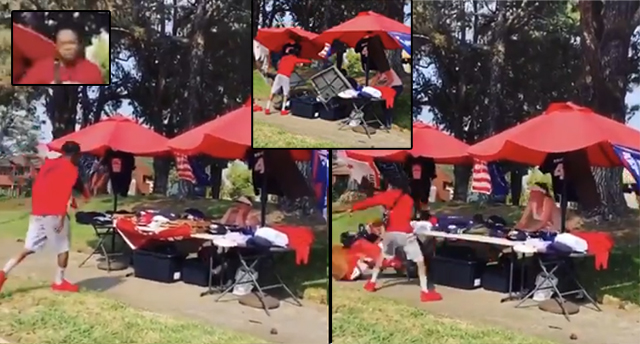 The video appears to have been filmed by an accomplice as the two seemingly drive off together in the same vehicle:

Here’s two images of the assailant via Twitter user ColonelUSAR: Unfortunately, I can’t yet find any word on where it occurred.

The scene is awfully reminiscent of the BLM mob a little over a week ago in Rochester, New York invading a restaurant and shoving over diners’ plates and drinks while chanting for white people to hand over their property.

As BLM and the media have informed us, Black folks are terrified that White people and especially White cops will shoot them at any moment for the slightest misstep.

As videos like these and hundreds of others make clear, they have to live their lives in constant fear because they can be shot at any second just for buying skittles or going for a jog.

As critical race theory expert Ashleigh Shackelford taught us, all white people are racist and literal demons so anything bad done to them by oppressed folks like these is inherently justified.

The most effective way to combat racial discrimination is to continually remind white people that they are inhuman demons who are beyond redemption. pic.twitter.com/WclBps4IKz