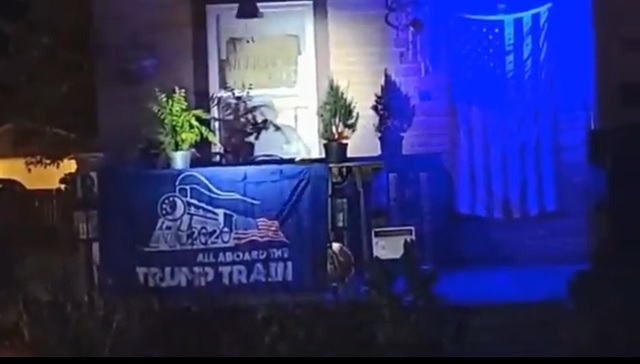 Black Lives Matter agitators organized a protest outside a Trump-supporting man’s residential home in Milwaukee, Wisconsin on Tuesday night and rather than arrest the mob for harassment and causing a public disturbance police reportedly arrested the man for “brandishing” a gun from inside his home at the mob.

BLM protesters in Milwaukee, Wisc. surround a man’s house. He has a Trump & US flag on the outside. He appears to ready a gun from inside the home. He was reportedly arrested for brandishing the weapon. pic.twitter.com/tMKFUGVCa5

Kitty Shackleford shared video of the man being arrested to cheers from the mob:

I'm still trying to figure out whose house this is. Milwaukee, WI – seems to be outside of a house who BLM is saying pointed a gun at them. The title of the video is "We still lit – This goes out to all the racist neighbors out there" so I assume it is just a local "racist" 1/3 pic.twitter.com/84X6BDQwnD

BLM group, including children, pouring onto someone's property that they seem to be harassing after he was arrested by police. They're calling him "Probation Pete," and are celebrating his arrest. Milwaukee, WI 2/3 pic.twitter.com/WsrIaUZs0T

The “protest party” was organized on Facebook by BLM agitator Vaun L. Mayes because the man allegedly said the N-word and had a Confederate flag.

This is what was going on outside the house before he "pulled a gun on them." They went specifically to his house to protest him for "being a racist." The homeowner was arrested, and the crowd remains outside. They seem to have gone on his property. WTF Milwaukee? (more above) pic.twitter.com/cMs6MpMe4y

Vaun Mayes is currently facing federal charges for “plotting to firebomb a Milwaukee police station after the Sherman Park unrest in 2016,” according to CBS 58.

Mayes was arrested in June on suspicion of burglary as a party to a crime in relation to a violent George Floyd riot where a home was set on fire but the District Attorney declined to file formal charges in August.

This is pure Anarcho-Tyranny.

According to the Milwaukee police, “several individuals” protested outside his home and one of the BLM agitators told them he “pointed the gun at the crowd.”

He was arrested “for endangering safety by use of a dangerous weapon while under the influence of an intoxicant, disorderly conduct while armed and bail jumping.”

Suspect arrested for pointing and aiming a long gun at protesters pic.twitter.com/K7OFuW4Lda