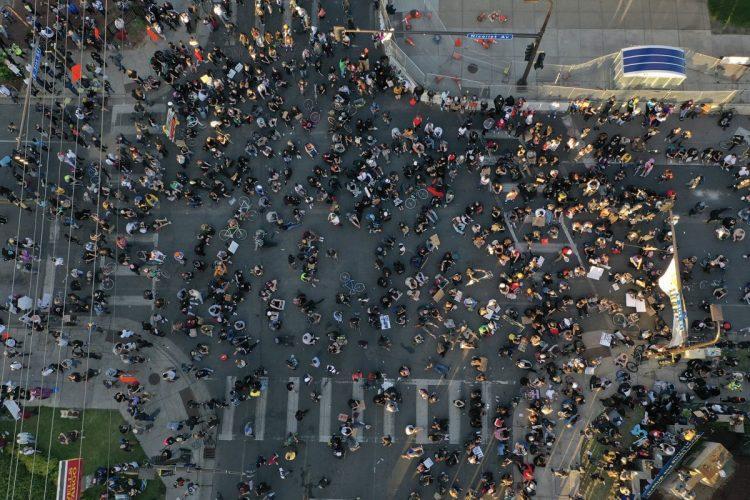 “We’ve got to have a civilian national security force that’s just as powerful, just as strong, just as well-funded [as the military].” – Barack Obama, 2008

If Hillary Clinton had been elected as our president in 2016 and was seeking reelection in November, George Floyd would probably still have met his unfortunate end on May 25 in Minneapolis after a police officer kneeled on his neck during his arrest. Video footage of the incident would still have elicited outrage and touched off demonstrations – but that’s where the similarity to actual events would have ended.

Had Hillary Clinton been our president, when it became clear that the officers involved in Floyd’s death were to be prosecuted, any protests that had arisen would have died down and the focus would have been on those prosecutions. Incidents such as the tragic death of Breonna Taylor, who was fatally shot by police in her Louisville, Kentucky, apartment six months ago following the horribly flawed execution of a no-knock warrant would have been handled through quiet legal diplomacy and the rule of law.

Why such a different outcome with only the replacement of a chief executive? The answer is simple: If Hillary Clinton were our president and facing re-election, the radicals who have been terrorizing our cities for the past six months would have been ordered to stand down – or more accurately, they never would have been given their marching orders to start with.

In a new series on Fox Nation (a Fox News streaming service), veteran journalist Lara Logan examines the rise of socialism in America in recent years. In the program, Logan discusses the case of George Floyd and the rioting that followed his death.

“With tragedy came opportunity for the socialist resistance on the left, a moment for their own Marxist revolution, and they were ready,” Logan says in the series.

But why were they ready?

It occurs to me that the average lazy suburban white kid – or nonwhite kid, for that matter – who happens to be a fan of “democratic socialism” but who has a job or an education they’re pursuing has neither the time nor the inclination to become a domestic terrorist due to outrage over the wrongful death of one black man at the hands of police. Nor is it likely that thousands of their like-minded peers would organically mobilize and take to the streets, giving rise to the protracted civil unrest we’re witnessing today.

On Monday, conservative radio talk-show host Rush Limbaugh took a call from an individual who claimed that the aforementioned civil unrest and escalating racial tension we’re seeing had their genesis in the administration of Barack Hussein Obama. Although I’m sure Mr. Limbaugh knew full well what the caller was getting at, he asked that this individual explain himself for the edification of his audience.

It was somewhat gratifying to hear this person’s explanation, because I’ve maintained for a long time that far too few Americans have acknowledged the truth of this argument.

As I’ve said more than once in this space, and as I chronicled in real time, Obama dedicatedly strove to compromise race relations in this country almost from the moment he took office. From claiming that Cambridge, Massachusetts, police “acted stupidly” when they arrested his Harvard mentor Henry Louis Gates Jr., to Eric Holder’s Justice Department advancing a racism narrative in the cases of Trayvon Martin and Michael Brown, to emboldening radical factions like the New Black Panther Party (with whom Obama marched prior to running for president), the rhetoric and actions emanating from the Obama White House could only be characterized as sabotage.

Obama’s ongoing narrative of America having remained an institutionally racist nation, despite 60 years of social and economic progress in this area, was parroted by the establishment press, Democrats and the entertainment industry for eight long years, souring race relations and setting the stage for the tragic comedy we now see being played out across our country.

So, when people say that Barack Obama set race relations back decades – and many do – this is not hyperbole. The fact that he performed this function is simply not open for debate. We now have a generation of young black people who grew up during the years of his presidency and who literally believe that blacks are no better off now than they were in 1955. Even those who have fared exceptionally well seem to think that they’ve suffered somehow under “systemic racism.”

While there are some in Washington who are calling for investigations into the organizational structure and funding of groups engaging in nationwide rioting, any such inquiries are likely to extend well into President Trump’s next term. I would wager that the more powerful the individuals and agencies involved in the facilitation of these violent demonstrations, the less likely that any of them will be brought to justice.

Every American should be heartsick at the extent to which young black minds have been poisoned by socialists. In practical terms, however, those electing to participate in rioting and mayhem in our cities from this point forward should be considered enemy combatants in a civil insurrection, and should be dispatched accordingly, regardless of ethnicity.

Erik Rush is a New York-born columnist, author and speaker who writes sociopolitical commentary, and host of the FULL-CONTACT With Erik Rush LIVE! streaming radio show. He is also the Founder and Chief Editor of the Instigator News Network. In February of 2007, Erik was the first to break the story of Barack Obama’s ties to militant Chicago preacher Rev. Jeremiah Wright on a national level. His book, “Negrophilia: From Slave Block to Pedestal ~ America’s Racial Obsession,” has been called “the definitive book on race politics in America.”
Share
Tweet
Share
Pin