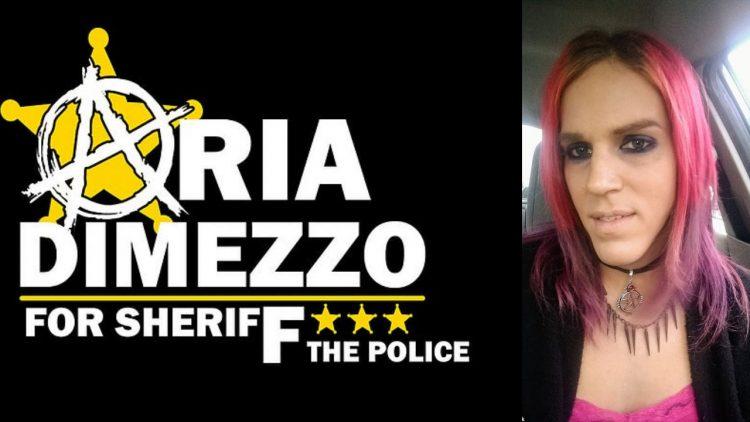 This will become more and more prevalent as the Republican Party fails to stand by it’s self-proclaimed platform and begins embracing sodomites, lesbians and while claiming it is pro-life continues on the path of “regulating” abortion rather than abolishing it.  A man who dresses as a woman, identifies as a satanist and anarchist and loudly proclaimed “F*** the police!” has now won the GOP primaries for county sheriff.

‘I can’t imagine they’re happy about this,’ Aria DiMezzo told Inside Sources when asked about the reaction from Republicans.

DiMezzo captured the GOP nomination for Cheshire County sheriff on Tuesday night after she ran unopposed in the party primary.

She won despite the fact that she received no support from the county or state GOP.

DiMezzo will have an even more formidable task as she will face off against a four-term incumbent, the Democrat Eli Rivera.

The head of the Cheshire County Republican Party, Marylin Huston, misgendered DiMezzo by referring to her as ‘he’ when she offered congratulations.

‘He did very well with the primary and that was wonderful,’ Huston said.

DiMezzo is a member of a group of Libertarian activists known as the Free Keene group.

During the recent GOP primary for governor, the group backed Rich Paul, who legally changed his name to Nobody.

Nobody lost the primary on Tuesday to the Republican incumbent, Governor Chris Sununu.

Last year, Nobody lost his bid to become mayor of Keene.

The “she” should actually be “he,” Daily Mail.  Stop pretending with these mentally ill people.  I’ll at least give credit to Huston for properly labeling the gender of Nobody.

Listen to this nonsense, and keep in mind, this is why I say that if a person is a Libertarian that adheres to God’s law, that is fine, but those apart from the law of God who claim to be Libertarian are, in fact, practicing Satanists (Do what thou wilt will be the whole of the law).

Do you see what happens when you will not adhere to the standards of the law, namely God’s law?  You invited every “dirty bird” (Revelation 18:2) into the mix.  By the way, who in that county voted for this degenerate?

Article posted with permission from Sons of Liberty Mediq