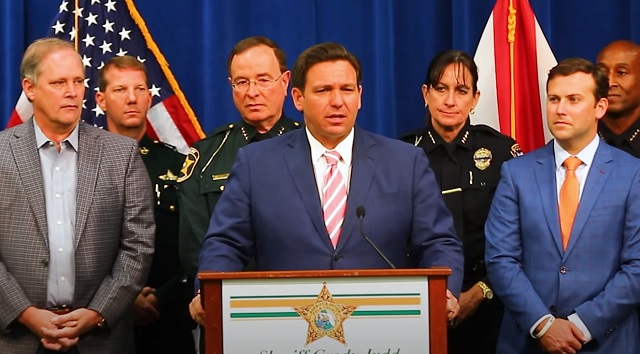 Florida Governor Ron DeSantis on Monday unveiled astonishing new legislation to punish violent rioters, add RICO liability to those funding their operations, allow victims of rioters to sue local government officials who left them defenseless against the mob in dereliction of their duties and more.

Today I announced bold legislation that creates new criminal offenses and increases penalties for those who target law enforcement and participate in violent or disorderly assemblies. We will always stand with our men and women in uniform who keep our communities safe. pic.twitter.com/ITl5GmmrZJ

Florida’s governor, surrounded by sheriffs, police chiefs and state legislative leaders, announced a new bill that will increase penalties against protesters involved in looting and violence. The proposal will also cut state funding to cities that “defund the police.”

The bill will be introduced in the next legislative session, and will push felony charges against violent protesters, including against those who block roadways.

“I look at what goes on in Portland. They’ll have people, they’ll arrest them,” Governor Ron DeSantis said during Monday’s press conference. “They’re all scraggly-looking ANTIFA-types. They get their mugshot taken, then they get released. It’s like a carousel; on and on it goes.”

“That’s not going to happen in here in Florida,” he added.

DeSantis is giving Floridians a reason to vote Republican. Their next legislative session starts next year and DeSantis said every official running right now should be made to go on record stating whether they support the bill.

A provision in the bill would go after local governments who appear to be focusing on cuts to police departments, and in turn will cut state funding to those municipalities. However, DeSantis said if it appears to be a normal budget cut, then the local government won’t lose state funding.

Blocking streets, or obstructing traffic during an unpermitted protest would become a third-degree felony under the bill. Drivers would not be liable for injury or death if they are fleeing for safety, the governor explained.

If the proposal passes, those convicted of participating in a violent of disorderly assembly will be ineligible for state benefits. The individual will also not be eligible for state or local government employment.

Here’s the bulletpoints from the “Combatting Violence, Disorder and Looting and Law Enforcement Protection Act” summary above:

DeSantis gave a press conference on the proposed legislation:

This is an incredible piece of legislation which should be adopted throughout the entire country.

Removing sovereign immunity from officials who allow the riots to occur is perhaps the most important of all.

When the government allows riotous mobs to operate unimpeded and prevents police from doing their jobs all the violence the mob commits lays squarely at the feet of the officials who created the situation of lawlessness — and yet they’re never held accountable.

On top of that, as we just saw with Jake Gardner, government officials are going a step further and criminally charging those who defend themselves from the mob when they and their property are attacked.

All these riots in Democrat-controlled cities are effectively state-sanctioned violence and the criminal officials allowing them to occur need to be held personally responsible and thrown in prison.