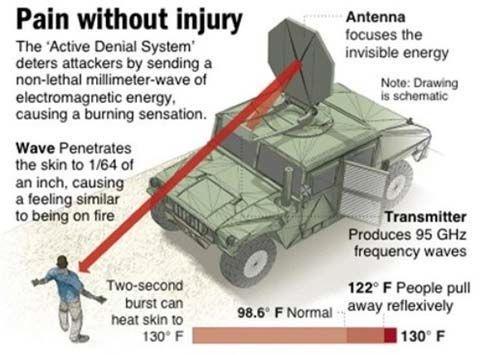 Of course, none of this would ever be deployed to protect peasants like you and me, but here we are with the Pentagon actually stating they were considering using an “experimental heat ray” to protect the White House.

In any case, Tyler Durden has the story.

An experimental Pentagon weapon which was intended for use in varying scenarios from deterring pirates on the high seas to riot control in city streets in cases of mass unrest is subject of fresh controversy after documents of its field trials surfaced.

Two decades ago the DoD revealed a weapon called an Active Denial System (or ADS), nicknamed the ‘pain ray’ or also ‘heat ray’ which was capable of inflicting an invisible zap of pain upon protesters failing to disperse, or alternately could deter hostile boats approaching a battleship.

It works by directing a blast of energy at a target, causing subjects brief but excruciating pain – as if the skin is on fire – which leaves no lasting or permanent injury. It essentially hits a subject with a blast of intense, searing heat. A 2007 field test later leaked to Wired revealed, however, that an airman serving as test subject was severely burned by the device.

This despite Raytheon scientists who developed it attempting to assure that it is completely safe and only induces temporary discomfort.

“The nonlethal device works by emitting a microwave beam at 95 gigahertz, a specific frequency that penetrates the outermost layer of skin, creating an intense burning sensation, but not powerful enough (in theory) to cause a burn,” Yahoo News reports this week, after defense officials reportedly looked into using the pain ray to deter recent hostile rioters near the White House.

After failing to be effective in either Iraq or Afghanistan, in part reportedly because it takes so long to power up, and it must be operated from a platform no smaller than a Humvee or other large military vehicle, Pentagon officials mulled the potential for it to be used to deter increasingly violent protests such as hit American cities this summer.

But it’s yet unknown what effects it might have on young children, the elderly, or on people with pre-existing health issues.

And this is why an NPR report this week is causing so much controversy:

A spokesperson for Joint Forces Headquarters Command in Washington, D.C., confirmed to NPR that hours before federal police officers cleared a crowded park near the White House with smoke and tear gas on June 1, a military police staff officer asked if the D.C. National Guard had a kind of “heat ray” weapon that might be deployed against demonstrators in the nation’s capital.

Col. Robert Phillips, a spokesperson for the Joint Force Headquarters-National Capital Region, or JFHQ-NCR, said the inquiry was made “as a matter of due diligence and prudent military planning.”

That was during the height of George Floyd and Black Lives Matter protests which inundated D.C. streets and especially areas around the White House.

A prior active demonstration of how the ADS works:

By the way, I’m guessing the government would also have a problem with anyone in the civilian constitutional militia having one of these weapons at their disposal especially, seeing that they are so hellbent on restricting and regulating our right to keep and bear arms.