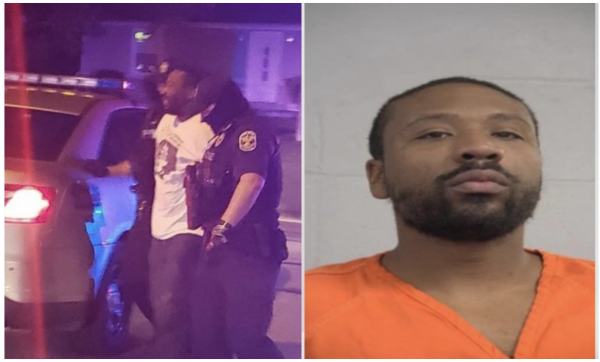 We all know what’s coming. There’s a logical conclusion to endless, ceaseless anti-white narrative pervasive in every aspect of American life, penetrating even to the core of our every interaction with fellow citizens. A black guy walks into a bar, wearing a shirt promoting the interests of the Black Lives Matter blood libel against White America, and opens fire… two whites are shot and one black male. [Black Lives Matter Activist Wearing ‘Justice for Breonna Taylor’ Shirt Walked into a Louisville Bar and Murdered Three People, The GateWay Pundit, September 20, 2020]:

A black male walked into a Louisville bar owned by a retired police officer and shot three random people at point blank range on Friday night — while wearing a Justice for Breonna Taylor shirt.

The suspect was smiling from ear to ear as he was arrested for the shooting at Bungalow Joe’s Bar and Grill.

Michael E. Rhynes Jr., 33, was arrested just after midnight Saturday after police found him crawling in brush near the restaurant, according to a report from WDRB.

The shooter was wearing a “Justice for Breonna Taylor” t-shirt. Naturally, the national media has completely ignored this story — which certainly would not have been the case if a mass shooter had been wearing a “Trump” shirt. Taylor became a Black Lives Matter martyr after being killed by Louisville Police during a “‘knock and announce” drug raid, during which her boyfriend shot at police.

“Nobody had ever seen this guy before,” the owner of the bar, Joe Bishop told WDRB, referring to the shooter. “It was a totally random act.” He explained that the men did not exchange words at any time prior to the shooting.

Two of the victims were white and one was black.

Toreon Jermaine Hudson, 26, and William Scott Smallwood, 48, were pronounced dead at the scene, while Steven Matthew Head, 24, died from his injuries at University Hospital.

One of the victims was the fiancé of the bar manager and all three of the men worked together.

There are good Americans of every race. Those who engage in pattern recognition are unfairly characterized as white nationalists or white supremacists, immediately disqualifying them from admission into polite society (where the only vernacular spoken is one dominated by denouncing white privilege, systemic racism and implicit bias).

But there’s noting wrong with noticing intensifying anti-white sentiment across America and what will happen if it goes unopposed.

That doesn’t make you a white nationalist or white supremacist, but someone prepared to fight the future, a place where the anti-white sentiment of the elite today, becomes the permanent foe requiring immediate removal tomorrow.