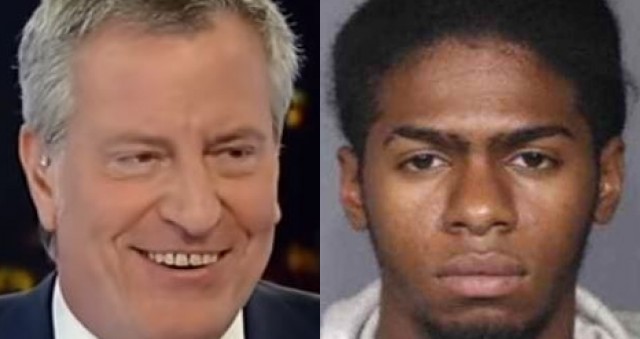 New York City which is a sanctuary city has released an illegal alien back into the community ten times over the last two years, despite his long criminal record.

NEW YORK – U.S. Immigration and Customs Enforcement (ICE) lodged 10 immigration detainers during the past two years on an illegally present Dominican national after he was arrested on 10 separate occasions by the New York Police Department (NYPD). After each arrest, he was released into the community to reoffend with active immigration detainers in place.

“Jhonny Alejandro Soto-Ubaldo is one of many examples of how New York’s sanctuary city policies place the safety of the residents at risk. Their willful uncooperative nature provides criminals such as Soto-Ubaldo the opportunity to re-offend,” said Tony H. Pham, senior official performing the duties of the director for ICE.

ICE also lodged immigration detainers with the NYPD, which were not honored, after Soto-Ubaldo’s arrest for unauthorized use of a vehicle and criminal possession of stolen property in March 2020 and following his arrest for criminal mischief and assault in May 2020.

In September 2020, he was arrested on federal firearms charges and is currently in U.S. Marshals custody; ICE has an active immigration detainer lodged with the Federal Bureau of Prisons. ICE will take custody of Soto-Ubaldo following the resolution of firearms charges, which are pending before the U.S. District Court for the Eastern District of New York.

“What makes this case so frustrating is that local law enforcement failed to honor 10 detainers, despite Soto-Ubaldo’s lengthy criminal history. How can local politicians – in good conscience – say they’re protecting their constituents when they pass laws that release criminals back into our communities? Detainer non-cooperation threatens public safety. It’s fortunate for the residents of New York City, that the subject is now being held on federal charges, and the ICE detainer will finally be honored,” said Thomas R. Decker, field office director for ICE’s Enforcement and Removal Operations New York Field Office.

He was previously featured on ICE.gov as a public safety threat to the local community after the NYPD failed to honor multiple ICE detainers.

ICE relies on the exchange of information with its law enforcement agency partners to access foreign-born inmates at local, state, and federal facilities, and the use of detainers as part of its public safety mission. In many cases, these individuals pose a demonstrable threat to communities.

By lodging detainers against those individuals, ICE makes every effort to ensure that removable aliens are turned over to ICE custody after their criminal detention rather than being released into the community where many abscond or reoffend.

Over the last fiscal year, the ICE ERO New York Field Office lodged 7,526 detainers against individuals for crimes including homicide, robbery, assault, sexual assault, weapons violations, and driving under the influence. The subjects of the detainers accounted for 17,873 criminal convictions, and 6,500 criminal charges.

The Blood On The Hands Of Propagandist And Warmonger Colin Powell
October 21st, 2021 Sons of Liberty Media