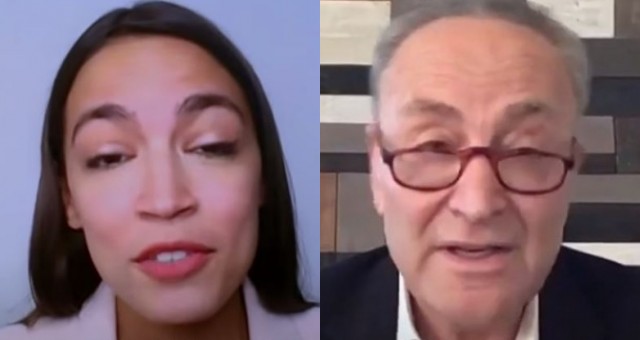 Desperate times call for desperate measures and it is clear that the democrats are very desperate right now and the only surprising point right now is that they haven’t attempted a direct call for impeachment.

All our rights are on the line.

To protect them, everyday people must mobilize in unprecedented ways to keep the SCOTUS vacancy open & win back the White House + Senate.

Breitbart continued:  When a reporter asked if buying time could include impeachment of President Trump or Attorney General Barr, Ocasio-Cortez said, “Well, I think I am. I believe that certainly, there has been an enormous amount of law-breaking in the Trump administration. I believe that Attorney General Barr are is unfit for office am, and I am that he has pursued potential we are breaking he here. That being said, this is these are procedures that are in decisions are largely up to house Democratic leadership. But I believe that I also we must consider all the tools available to our disposal and that all of these options should be entertained and on the table.”

Schumer and AOC are not the only ones discussing possible impeachment proceedings against President Trump.

Speaker of the House Nancy Pelosi (D-CA) told Kara Swisher of the New York Times in an interview released Monday that the House of Representatives can impeach President Donald Trump “every day of the week for anything he does.”

Swisher, a tech journalist with left-wing views, was pushing Pelosi to commit to doing more to fight back against President Trump, the Republican, and the conservative agenda.

The democrats are not going to put fear into President Trump nor will they be able to bully him or his administration around, try as they might.

President Trump responded to Pelosi and her mini regime that is rumoring impeachment against the President.

“Go ahead. I want them to do that … I’m the only guy in the world that could get impeached for trying to fill a seat on the Supreme Court,” Trump

Our nation is currently in an amazing pandemic that has more controversy around the truth of it.  Now we have to continue to tolerate more attacks by the left, riots and looting and as if all this insanity was not enough, now the democrats are willing to try impeaching our President simply to try and stop him.