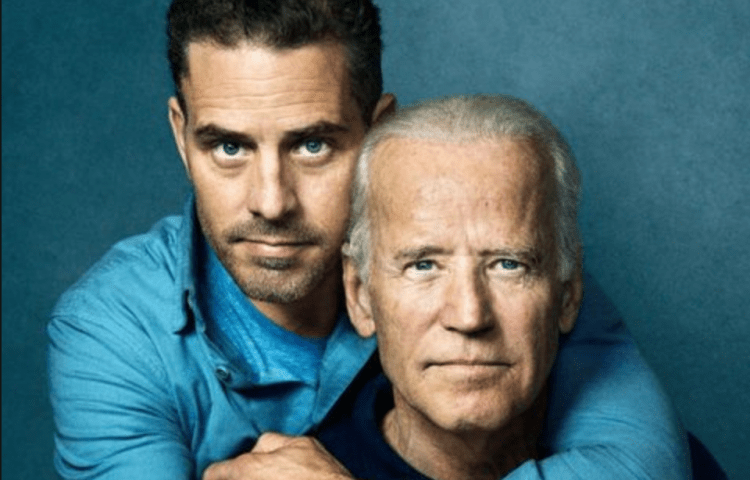 The probe found that in 2015, two Obama administration officials voiced concerns to White House officials about the possibility that the younger Biden serving on the board of Burisma could create the appearance of a conflict of interest, as his father oversaw Ukraine policy.

The report states that the Obama White House knew that Hunter’s position prevented “the efficient execution of policy with respect to Ukraine.”

“Hunter Biden paid nonresident women who were nationals of Russia or other Eastern European countries and who appear to be linked to an “Eastern European prostitution or human trafficking ring.”

Joe Biden’s son took $3.5 million from the wife of the former mayor of Moscow and used some of that money to to pay for “private time” with sex trafficked women who were being human trafficked by the Russian mob. If a Trump did what Hunter Biden has done, they’d be in jail.

The Senate Homeland Security and Finance Committees on Wednesday released an interim report on their monthslong joint investigation into Hunter Biden’s role on the board of Ukrainian natural gas firm Burisma Holdings and his alleged “extensive and complex financial transactions.”

Homeland Security Committee Chairman Ron Johnson, R-Wis., and Finance Committee Chairman Chuck Grassley, R-Iowa, said their investigation has “faced many obstacles” from Democrats on their committees and that executive agencies “failed to comply with document requests.”

The chairmen added that “there remains much work to be done” in their probe. Hunter Biden is the son of the Democratic presidential nominee Joe Biden. His work background played a starring role in the Trump impeachment efforts earlier this year. He and his father have denied any wrongdoing related to his work.

Kerry Lied About Not Knowing Of Hunter Biden’s Business In Ukraine https://t.co/hAk0tEePdk

The 87-page report stated that Obama administration officials “knew” that Hunter Biden’s position on the board of Burisma was “problematic” and that it interfered “in the efficient execution of policy with respect to Ukraine.”

“This investigation has illustrated the extent to which officials within the Obama administration ignored the glaring warning signs when the vice president’s son joined the board of a company owned by a corrupt Ukrainian oligarch,” the report’s executive summary stated.

We all know that if the Trump family had one billionth of the problems laid out in Senate report on Biden corruption, media would be hysterical beyond belief. We all know that. https://t.co/z2xdaT8HZh

Hunter Biden joined Burisma in April 2014 and, at the time, reportedly connected the firm with consulting form Blue Star Strategies to help the natural gas company fight corruption charges in Ukraine. During the time Biden was on the board the company’s board, then-Vice President Joe Biden was running U.S.-Ukraine relations and policy for the Obama administration.

“Even though Hunter Biden’s position on Burisma’s board cast a shadow over the work of those advancing anticorruption reforms in Ukraine, the Committees are only aware of two individuals who raised concerns to their superiors,” the Senate report stated. “Despite the efforts of these individuals, their concerns appear to have fallen on deaf ears.”

The report also stated that Hunter Biden “formed significant and consistent financial relationships” with the founder of Burisma, Mykola Zlochevsky, and that his and his business partner Devon Archer’s firms “made millions of dollars from that association” while his father was vice president.

The Senate committees also revealed in the report that they obtained records from the U.S. Treasury Department, which “show potential criminal activity relating to transactions among and between Hunter Biden, his family, and his associates with Ukrainian, Russian, Kazakh and Chinese nationals.”

The committees stated that they received records that Hunter Biden “sent thousands of dollars” to individuals who have “either been involved in transactions consistent with possible human trafficking; an association with the adult entertainment industry; or potential association with prostitution.”

“Some recipients of those funds are Ukrainian or Russian citizens,” the report states, adding that “the records note that it is a documented fact that Hunter Biden has sent funds to non-resident alien women in the United States who are citizens of Russia and Ukraine and who have subsequently wired funds they have received from Hunter Biden to individuals located in Russia and Ukraine.”

“The records also note that some of these transactions are linked to what ‘appears to be an Eastern European prostitution or human trafficking ring,’” the report stated.

Meanwhile, the report states that Senate investigators found millions of dollars in “questionable financial transactions” between Hunter Biden and his associates and foreign individuals, including the wife of the former mayor of Moscow as well as individuals with ties to the Chinese Communist Party.

According to the report, an investment firm co-founded by Hunter Biden, Rosemont Seneca Thornton, “received $3.5 million in a wire transfer” from Elena Baturina, the wife of the former mayor of the Russian capital.

The report goes further and alleges that not just Hunter Biden but other members of the Biden family “were involved in a vast financial network that connected them to foreign nationals and foreign governments across the globe.”

In one instance, the report stated that Hunter Biden “opened a bank account” with a Chinese national linked to China’s communist government, which “financed a $100,000 global spending spree” for the former vice president’s brother, James Biden, and his wife, Sara Biden.

The report comes as the investigation itself has faced scrutiny from Democrats and even some Republicans.

“As the coronavirus death toll climbs and Wisconsinites struggle with joblessness, Ron Johnson has wasted months diverting the Senate Homeland Security & Governmental Affairs Committee away from any oversight of the catastrophically botched federal response to the pandemic, a threat Sen. Johnson has dismissed by saying that ‘death is an unavoidable part of life.’ Why? To subsidize a foreign attack against the sovereignty of our elections with taxpayer dollars — an attack founded on a long-disproven, hardcore rightwing conspiracy theory that hinges on Sen. Johnson himself being corrupt and that the Senator has now explicitly stated he is attempting to exploit to bail out Donald Trump’s re-election campaign,” Bates said in a statement Wednesday.

And last week, Sen. Mitt Romney, R-Utah, slammed the Homeland Security Committee’s probe into the younger Biden’s role on the board of Burisma Holdings as a “political exercise.”

“I know the committee has undertaken two major investigations [that have] political implications and one, of course, is the, I’ll call it the Biden/Burisma investigation,” Romney said last week. “And that, I think, from the outset had the earmarks of a political exercise and I’m fearful that comments made in the media recently have only confirmed that perspective.”

Romney went on to say that “obviously, it’s the province of campaigns and political parties, opposition research, the media, to carry out political endeavors to learn about or dust up at one’s opponent.”

“But it is not the legitimate role of government, for Congress or for taxpayer expense, to be used in an effort to damage political opponents,” Romney said.

Biden’s role on the board of Burisma and his business dealings emerged during the Trump impeachment inquiry in 2019.

Trump, during his now-infamous July 25, 2019, phone call with Ukrainian President Volodymyr Zelensky, pressed for Kiev to look into the elder Biden’s role pressing for the ouster of a Ukrainian prosecutor who had been investigating the founder of Burisma.

Allies of Joe Biden maintain that his intervention at the time had nothing to do with his son but rather was tied to corruption concerns. According to reports, by the time of Joe Biden’s intervention, the Burisma probe had been dormant.

Trump’s pressure campaign against Ukraine prompted a whistleblower complaint, and, in turn, the impeachment inquiry.

The president’s request came after millions in U.S. military aid to Ukraine had been frozen, which Democrats cited as a quid pro quo arrangement.

Trump was acquitted on both articles of impeachment – abuse of power and obstruction of Congress – in February.